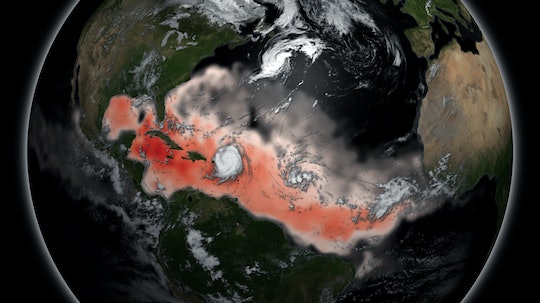 Hurricane Season 2017: Here's How Much Longer It Could Last

According to AccuWeather.com, "Hurricane season runs through the end of November, and it is possible the Atlantic may continue to produce tropical storms right up to the wire and perhaps into December." So, there's actually a lot more time left in this year's Atlantic hurricane season, and experts are warning that there could still be a couple more major storms to hit the United States before November comes to an end.

And as devastating as it's been so far, it's so important to stay informed about these events. They're terribly strong, and capable of so much destruction, so being prepared is crucial. In fact, to put the 2017 hurricane season in numbers isn't pretty, but again, it's necessary. According to USA Today:

Harvey killed 75 people, mostly in Texas, while Irma killed 87 people in the U.S. and its territories. The U.S. death toll from Maria now stands at 34 in Puerto Rico.

But it's not just the death toll that's making the 2017 hurricane season so record-breaking. As USA Today reported, one way in which hurricanes are measured is by something called the Accumulated Cyclone Energy (ACE) statistic. The outlet explained:

ACE is calculated by adding each tropical storm or hurricane's wind speed through its life cycle. Long-lived, intense hurricanes have a high count (Irma's ACE measured 67.5), while short-lived, weak hurricanes or tropical storms have lower values (Katia came in at 6.1).

And 2017's ACE rating? It stands incredibly high, at 204. For reference, the average ACE for Atlantic hurricane season is 110, according to Weather Underground. So, truly, this year stands out, and not in a good way. And technically, there's still just under two months left in the season, as hurricanes tend to retain their strength up until cooler air enters the atmosphere in the autumn months. As Accuweather explained:

On average, strong west to northwest winds with cooler and drier air tend to scour tropical systems out of the western Atlantic during October and November... However, this year, AccuWeather meteorologists are concerned that these winds may not occur until later in the autumn or may be too weak to steer tropical threats away from the U.S.

As it stands, there are still 53 days left in the 2017 hurricane season. And while Hurricane Nate, the latest storm to barrel towards the United States this year, has officially weakened to a tropical storm, there is still plenty of time for other storms to develop in the Atlantic.

This year has been especially devastating, so hopefully this one lingering storm is all that's left of the season.