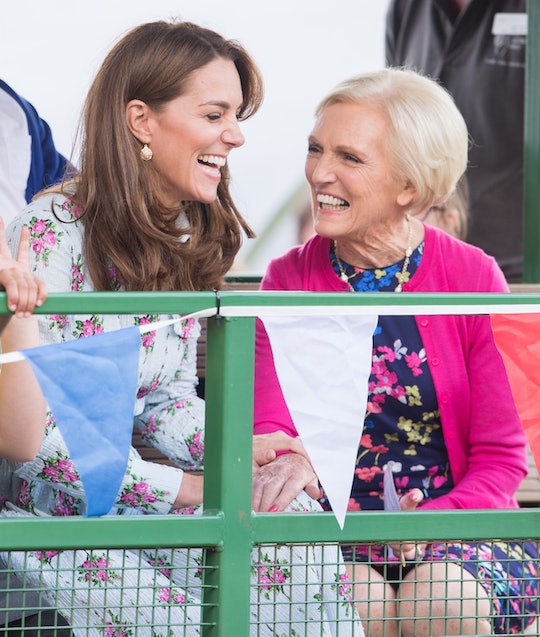 Celebrities cooking holiday meals for charity sounds like the perfect seasonal special, right? And who better to showcase their culinary abilities than a beloved duchess and a legendary food writer? Well, Mary Berry and Kate Middleton have a cooking special, aptly titled A Berry Royal Christmas, airing later this month and you can officially tick that off your holiday wishlists.

Kensington Palace announced the upcoming special on Instagram Saturday, sharing details of the royal couple's collaboration with Berry, a former judge on The Great British Bake Off, where they will cook Christmas dinner for a group of volunteers. A Berry Royal Christmas, — set to air on BBC One at 2:30 p.m. ET on Monday, Dec. 16 — will follow Prince William and Middleton as they host volunteers at a variety of charities supporting causes they care about, such as healthy eating, homeless resources, and addiction recovery.

Berry is a natural partner for the project, considering her history with the family. Middleton first expressed her admiration of Berry's baking at an event in 2013. "Prince William said Kate used my recipes," Berry told Hello! Magazine at the time. "They were big fans at a charity auction." Berry and Middleton most recently collaborated at an event this past September, according to The Daily Express, having a garden date for the opening of the Royal Horticultural Society's Back to Nature Garden in Wisley.

Additionally, a royal insider told Racked that Middleton cooked at her childhood home as well. "You have to remember that she’s not royal. She comes from a normal background and a normal home where she’s always cooked for herself," former Kensington Palace chef Carolyn Robb told the outlet. "And what I’ve always heard is that William enjoys spending time with her family because they just eat together at the kitchen table like a normal family. I’m sure that that’s what they still do." What's more: the family may not even employ a chef on a regular basis. "They have a small household and can fend for themselves," Robb told Racked.

Only time will tell how much of Middleton's culinary ability will be shown on air during A Berry Royal Christmas later this month, but it sounds like a very special program nonetheless.