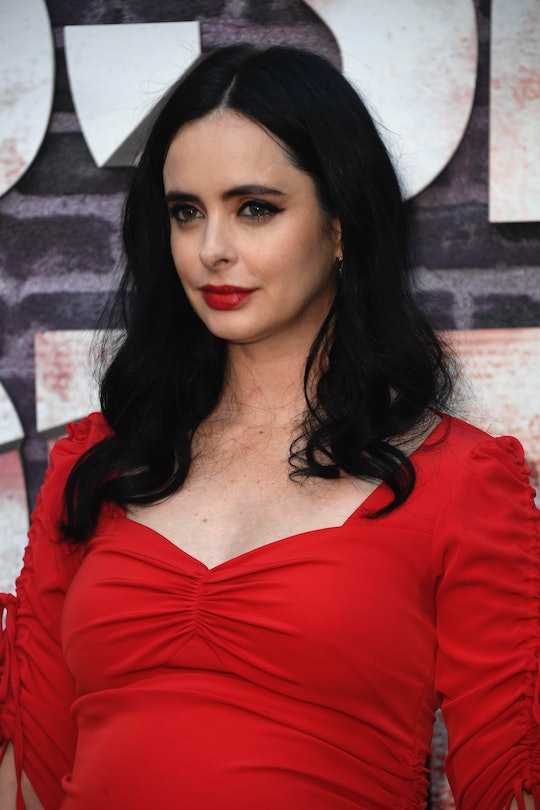 Not long ago, Jessica Jones star Krysten Ritter revealed on the red carpet at the Oscars that she's expecting her first child. Fast forward roughly four months later and she's already celebrated her baby shower. Where has the time gone!? With so much excitement going on, it's fair to wonder when when Krysten Ritter is due with with baby-to-be.

It was on Feb. 24 that Ritter announced her pregnancy on the Oscars red carpet, according to Marie Claire, and she did so with such flair, simply wearing a form-fitting Reem Acra dress that showed her adorable bump off to the world. Then, on May 29, she showed up at a special screening for the last season of her show, Jessica Jones, in a splashy red dress with her bump on full display, as Metro reported.

And on Sunday, June 2, Ritter posted photos from her baby shower, which most women opt to do about a month before their due date, according to women queried by The Bump. So with that said, this timeline could mean Ritter, who's expecting her first child with her partner Adam Granduciel, could be welcoming her bundle of joy around the end of June or beginning of July. Not too far away!

It looked like Ritter's baby shower had a musical theme, which included creative desserts and a cake shaped like a record player. And her burgeoning bump, of course, also got a lot of love as she posed with friends, including former co-star Mike Colter from Luke Cage.

Even though she only announced the baby news about four months ago, Ritter has been pretty generous about documenting moments from her pregnancy on her social media. On March 25, for instance, she shared an adorable photo of herself posing in a heart-patterned swimsuit as she cradled her bump.

And in April, she shared another bathing suit shot with her bump on display with the perfect hashtag, "#sunsoutbumpsout."

In early May, she shared another bumpdate with her fans on Instagram, writing, "Jessica Jones 3 press day! - Me and the baby bump got dolled up in this sweet vintage @gucci jacket."

This is the final season for the Jessica Jones, which drops on June 14, according to the Metro. And it's likely an emotional time for the mama-to-be. Earlier this year, Ritter posted a photo from the final table read from the show and shared what playing the character had meant to her.

"It has been a dream to play Jessica alongside my amazing cast and the best crew in the business for these past 5 years. I am so grateful for every second of it," she wrote on Instagram in February. "We have THE BEST fans. You guys mean the world to me and I appreciate you beyond words. The final season of #JessicaJones is coming later this year and I am proud of how we complete JJ’s journey. I can’t wait for you all to see it. Stay tuned and more to come."

So keep an eye out on Netflix for that final season, and it probably won't be too long after that that Ritter will be welcoming her bundle of joy.