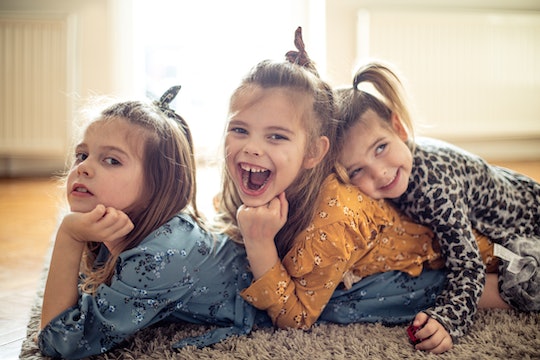 Celebrate The Jan Brady In Your Life This Middle Child Day

If you grew up with siblings, you know that birth order has an impact on the family dynamic. Being the oldest, middle, or youngest child gives you a unique perspective, but often society only focuses on the challenges and benefits of either being the youngest or oldest. Fortunately, there’s an effort to bring more attention to what it means to be the “middle child,” in the form of a national holiday. So when is National Middle Child Day in 2019, what does it mean to be a middle child, and what are some of the myths to challenge on this holiday?

National Middle Child Day in the U.S. is celebrated annually on August 12, according to the National Day Calendar website. It was started in the '80s by Elizabeth Walker, who wanted to create a special day for middle children who felt “left out.” The Cut reported that studies by Stanford and the City College of New York found that people had negative ideas about middle-born children, such as them being envious, overlooked, confused, and lacking in confidence. There’s even something called the “Middle Child Syndrome,” where the middle child feels left without a role (not being the oldest, the leader, or the youngest, the baby).

However, while there are certainly negative conceptions about being the middle child, the benefits are less often discussed. Journalist Katrin Schumann spoke to Psychology Today about her book, The Secret Power of Middle Children. She suggests that middle children are great at teamwork, and that many successful and empathetic people, such as Martin Luther King Jr., and Susan B. Anthony, were middle children. She proposes that middle children, due to their position within the family, can become great negotiators and take an interest in fairness and justice.

Are there really tangible differences between middle children and either first borns or last borns? While opinions on birth order’s effects on psychology vary wildly, some research has shown little difference in terms of personality. A study published in PNAS by members of the Department of Psychology from the University of Leipzig in Germany found, “[N]o birth-order effects on extraversion, emotional stability, agreeableness, conscientiousness, or imagination.”

Personally, I am the baby of the family, and I do think that being the youngest had an impact on the way I interact with others (namely, I love using my sense of humor to cheer people up, and I've always looked up to my older brother). While I tend to agree with the research about birth order not completely determining your personality, I do think it can give you a special viewpoint while growing up. Though I wasn't a middle child, my mother was, so I asked her what her experience was like. She says, "I can honestly say I loved growing up as a middle child! We middle children have the best of both worlds — we get to be protected and also learn how to be a protector. My older brother 'eased the path' for me and also taught me so many things that have stayed with me all my life, and my younger brother was a loving, loyal playmate, a constant companion during my early years, and we’ve never lost that bond."

So, on this National Middle Child Day, whether you yourself are a middle child, you have one, or someone you love is one, ignore any negative societal messages about what a middle child is supposed to be, and take the day to celebrate!