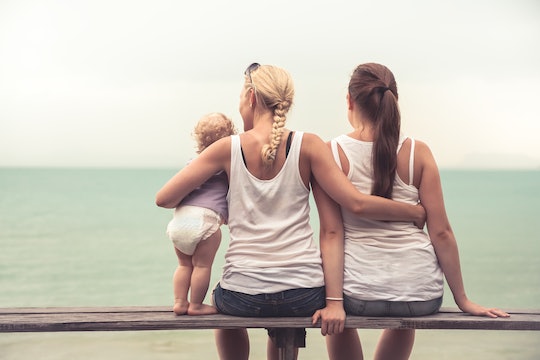 If There's One Date You Don’t Want To Miss This Year, It's Mother's Day

When you become a mother, you develop a newfound appreciation for your own mom and all she did for you over the years. You also begin to realize: Hey, I deserve a little appreciation too; this parenting job isn't what you'd call easy. Suddenly, a certain day in May takes on a whole new significance in your life. So go ahead and mark Mother's Day 2019 on your calendar now. Start planning something nice to do for your mother, and drop some subtle (or not-so-subtle) hints about how you'd like to be celebrated on this day devoted to the awesomeness of maternal care.

Always celebrated in America on the second Sunday in May, Mother's Day this year falls on May 12, according to Calendarpedia. Most other European countries follow our lead, along with other nations such as India, Australia, China, and Japan, but there are some exceptions. Many Arab countries, such as Egypt, set their Mother's Day on March 21, the vernal equinox, explained Office Holidays.

How did we get lucky enough to have a day all our own? It's actually an older tradition than you might think. As The Old Farmer's Almanac reported, the ancient Greeks used to set aside a time each year to honor the mother-goddess Cybele, as did the Romans.

Centuries later, the Christian tradition of "Mothering Sunday" — the fourth Sunday in Lent, so-called because worshipers would return to their home church on that day — was adapted to include giving gifts to mothers, or bringing a "mothering cake" to be shared by the family. Calendarpedia noted that the UK and Ireland still observe their Mother's Day on that date, so moms on the other side of the pond get their due in late March or early April.

The observance in America was a longer time in coming. As Calendar 365 told it, Ann Jarvis, known as "Mother Jarvis," was the first to propose a "Mother's Friendship Day" in 1868, as a way of promoting reconciliation among families who had become estranged because of their divided loyalties during the recently ended Civil War. Julia Ward Howe, the writer of "The Battle Hymn of the Republic," led a "Mother's Day for Peace" rally in New York several years later. She hoped it would become a regular observance, but it never caught on.

After Mother Jarvis died in 1905, her daughter Anna took up her mother's cause. According to the Farmer's Almanac, she tirelessly wrote and campaigned for the second Sunday in May to be established as a day for honoring all mothers. Once the mayor of Philadelphia got on board with the idea, it was only a matter of time before other political figures followed suit. Finally, in 1914, President Woodrow Wilson signed a bill declaring Mother's Day as a legal holiday. We've been thanking our moms in May ever since.

And boy, do we do it in style. According to Hallmark, Mother's Day is the third-biggest card-sending holiday in America, and the largest card occasion for the Hispanic community. It also comes in second only to Christmas in gift-giving, with $4.6 billion spent on jewelry alone, per CNN.

Ironically, added CNN, Anna Jarvis eventually wished she'd left it well enough alone. As Mother's Day became a flower- and candy- sending phenomenon, she started fighting back against the commercialization of the holiday. She even went after Eleanor Roosevelt at one point, who was promoting the day as more of a health-awareness initiative. But her protests died with her, and today, we have no qualms about celebrating our mothers in a big way.

We all know that our moms and the mother-figures in our lives deserve our love every day (and so do we!). But it's nice to know that there's one specific day carved out just to show affection, thanks, and a day off from chores.