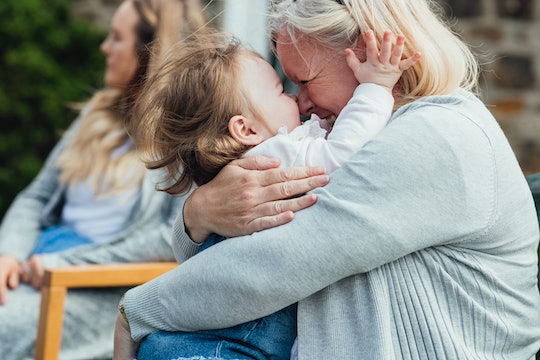 Grandparents Day Is Just Around The Corner, & This Is *The Year* To Go All Out

For the past seven months, I’ve lived with my mother-in-law. While some people might call that a nightmare (and I see you and respect your feelings on that) for me, it’s been a godsend. Everyday my 5-year-old son gets to play with his grandma, she helps him with his lessons, and watches him so my husband and I can keep working. So you better believe I’ll be celebrating National Grandparents Day, because she's what's keeping our little family going this year.

When and what exactly is this special day? Grandparents Day is a holiday to celebrate all the amazing things your parents do for you and your children, and this year it falls on Sunday, September 13, 2020. In 1979 it officially became a holiday and has been held henceforth on the first Sunday after Labor Day ever since.

How the event came into being, according to NationalToday.com, goes back to 1969 when a 9-year-old named Russell Caper wrote a letter to President Richard Nixon suggesting a special day be chosen to honor grandparents. Rose Mary Woods, the Personal Secretary to the President, wrote Russell back on June 12, 1969 with the following:

Thank you for your letter to President Nixon. Your suggestion regarding a Grandparent’s Day is appreciated, but the President ordinarily issues proclamations designating periods for special observance only when a Congressional resolution authorizes him to do so.

Fortunately for Russell and all the other children who believe grandparents worth celebrating, a joint resolution was introduced in the senate by Senator Jennings Randolph, of West Virginia, in 1977 requesting the president to “issue annually a proclamation designating the first Sunday of September after Labor Day of each year as ‘National Grandparents Day’.” And finally, on August 3, 1978, President Jimmy Carter signed the proclamation, and the day was finally celebrated the following year.

Incidentally, the United States isn’t the only country to hold a special date for grandparents. Australia, Brazil, Singapore, and Mexico also have national holidays on different dates for grandparents around the world.