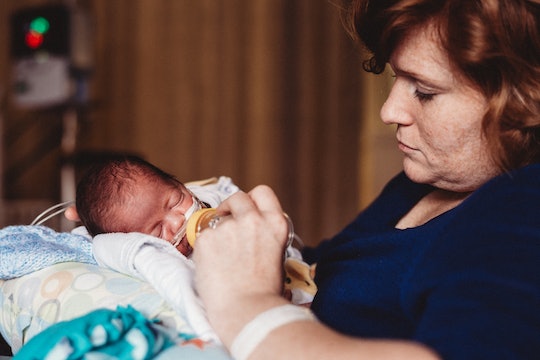 NICU Awareness Month Is Coming Up, & NICU Parents — We See You

While most have a general idea of what the NICU (neonatal intensive care unit) is, unless you've been through the experience, it's hard to understand what it's truly like. NICU Awareness Month lifts up the voices of families who are spending their days inside the specialized hospital ward, and honors the healthcare professionals who have chosen the emotionally trying job of caring for these babies. So when is NICU Awareness Month? It's the full month of September, and it's also synonymously referred to as Neonatal Intensive Care Awareness Month (NICA).

No parent imagines leaving the hospital without their baby in their arms, but that's the hard reality for many whose infants end up in the NICU. The percent of babies winding up in the special ward is actually climbing (as of 2015) and it's not just those who are born prematurely or babies of low birth weight, but also those who have swallowed meconium, are having breathing difficulties, or who have organ deficiencies (like underdeveloped lungs, which typically affects preemies).

According to a 2015 study in Jama Pediatrics (and reported thereafter by Parents) 77.9 per 1,000 live births were admitted into the NICU — about 7.7% of births. The most unexpected part of these findings, to me at least, was that while the number of admissions to the NICU climbed steadily from 2007 on, by 2012 babies born at "normal" birth weight or those who were carried to term (37 weeks) made up almost half of the infants admitted. The average stay in the NICU is 13.2 days, though that number can vary drastically.

This means there are a lot of families, all with different birth stories, who are living with their babies in the NICU at any given time. September offers hope for parents who are experiencing this grueling reality — hope for the mothers who are up at night pumping while their baby sleeps at the hospital, courage to the parents who don't know the exact fate of their baby, who had to completely shift their ideas and plans for what having a newborn would be like. For the caregivers of preemies, even something seemingly benign, like finding small enough clothes for their newborn, can be heart-wrenching.

Whether or not you personally know a healthcare worker on the NICU or a family who has been affected, you can show support to the cause by donating to your local hospital's ward, hosting an item drive (or when it's safe to do so, organizing a gathering for NICU "graduates" which is just about the sweetest thing ever). You could send care packages of in-demand items like swaddles, diapers, or cozy clothes, or you could consider offering the gift of time by going on a (much-needed) coffee run for parents. There are so many ways to show love to families, healthcare workers, and of course, the babies themselves. And just because NICU Awareness Month is September doesn't mean you can't lend a hand all year long.