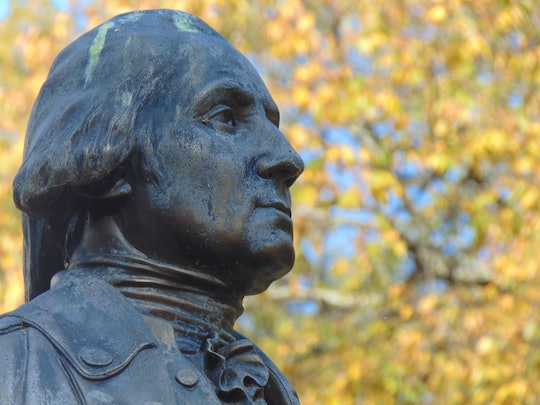 When your children turn 4 or 5, your life shifts from revolving around their meal and nap times to revolving around their school schedule. You quickly learn to check the calendar for holidays and request your days off work accordingly (or alert Grandma that you'll need babysitting services). The big-chunk vacations are easy enough to remember, but the one-day holidays can trip us up. For instance, if you're wondering when Presidents Day is this in 2019, you're not alone. Luckily, you have enough time to make your plans before the holiday arrives.

According to the Office of Personnel Management, which tracks all federal holidays, Presidents Day 2019 falls on February 18. The holiday is celebrated on the third Monday in February, regardless of the actual numbered date, explained Calendarpedia.

Fun fact: This day has been celebrated for more than 200 years, making it one of the oldest American holidays out there. As Office Holidays explained, George Washington was such a beloved president that people celebrated his February 22 birthday beginning in 1796. (An older calendar of the time was structured in such a way that his birthday fell on February 11, and some folks celebrated it on that date instead.)

The 1800s saw February 22 marked by parties, speeches and pub crawls. It stayed that way until after Abraham Lincoln's 1864 assassination, when some states began observing his February 12 birthday as a legal holiday. (New York, Illinois, Connecticut, and Missouri still do, according to Daily News.) In 1879, Washington's Birthday was finally declared a national holiday via a law signed by President Rutherford B. Hayes, History Channel reported.

The two birthday-holidays stayed fixed for a century or so, when Congress decided to simplify things by establishing the Uniform Monday Holiday Act in 1971, according to the History Channel. This created a number of permanent federal three-day weekend holidays, including the third Monday in February. Although the day is still officially called Washington's Birthday on the federal calendar, it's more commonly called Presidents Day in recognition of all our country's leaders. You might also see it spelled Presidents' Day or President's Day, because there has never been an agreed-upon official punctuation, explained The Washington Post.

Although Presidents Day is a holiday for all federal employees nationwide — meaning no mail delivery or other federal services — it's not a public holiday in all states, explained Office Holidays. Nine states don't observe it at all; there, schools may have the option of closing, but other offices and businesses may stay open.

Now here's where it gets really confusing: Office Holidays illustrated that three other states combine Presidents Day with other holidays. In Georgia, Washington's Birthday is observed on December 24 (which extends the Christmas holiday); New Mexico observes it on the day after Thanksgiving (so Presidents Day and Black Friday combine); and in Indiana, it falls either on December 24, 26, or the day after Thanksgiving. Got that?

Then there's Alabama, which goes totally rogue and calls the day "Washington and Jefferson Day," even though Thomas Jefferson was born in April, noted Alabama.com. Why? No one seems sure, although the site suggests "it's a reasonable guess that Alabama chose not to officially recognize the man who led the Union during the Civil War."

If you happen to live in one of the states where Presidents Day is actually a day off on the third Monday in February, there are things you can do other than hit the stores for the winter clearance sales. For example, you can take some time to teach your children some fun facts about the nation's presidents, or take a virtual tour of Mount Vernon, Washington's beautiful family home in Virginia. You could download the app Presidents vs. Aliens, which lets your child vanquish hostile space creatures while learning about all 45 Chiefs of State. Reader's Digest also suggested having your kids write a letter or send a tweet to the White House (keep it clean, please!).

However you choose to honor the day, do savor it: We won't have another federal holiday until Memorial Day on May 25.