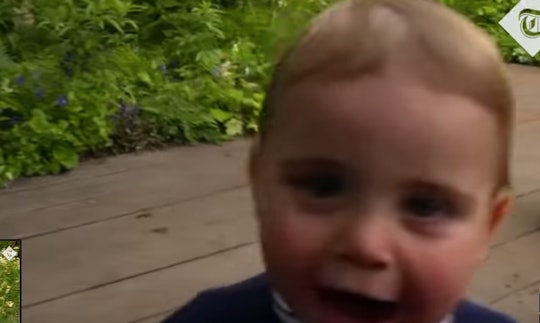 You Tube / The Telegraph

Here's When We Might Get To See Prince Louis Again

He's already one, so he'd better be ready to get to work! This toddler, the Duke and Duchess of Cambridge's adorable third addition, is set to be more media-friendly now that he's up and running (literally, that is, having just learned to walk) — a skill he showed off at mom Kate Middleton's recent urban-garden unveiling. So when is Prince Louis' next appearance? The young royal may pose for an iconic photo soon.

As People reported, there's talk that one of little Louis' first "official" appearances will be at the famed Trooping the Colour ceremony, which takes place in the U.K. every June in honor of the Queen's birthday.

The ceremony, which includes everyone in royal regalia, is well-known to U.S. fans such as myself for the appearance of the entire clan on the balcony at Buckingham Palace, which generally proves to be an amazing opportunity to see the Palace children in all their candid glory.

At last year's event, for example, Prince George, Princess Charlotte and royal cousin Savannah Phillips caused a sensation just by acting their age, whispering, giggling, making faces and putting their hands over each other's mouths in between bouts of being extremely well-behaved, reading books brought from home, as OK! magazine detailed. (Just like anyone else's kids, phew.)

The publication added that the kids' 2018 antics on the balcony were so entertaining, many fans noted last year on social media they were less attuned to watching the festivities, which as far as I can tell include a full-dress parade of colorful horses and military personnel that are already pretty entertaining in themselves.

So you'll understand the excitement over the fact that all signs point to the youngest of William and Kate's kids joining this year's fun, which will take place on Saturday, June 8, according to Hello! magazine.

The publication noted that Louis' older sis, Charlotte, made her first appearance at Trooping the Colour at 13 months, causing a near-nationwide "aww" with her mini-royal wave. Further, the mag chimed in that a very-young Louis actually was at last year's event; you just might not have seen him since he was "backstage," (that is, inside the palace), with Windsor nanny Maria Teresa Turrion Borrallo.

Meanwhile, Britain's Express newspaper noted that oldest Cambridge kid Prince George didn't attend Trooping the Colour festivities until he was two, in 2015. You can imagine the event, though, that the event, which officially notes the U.K.'s sovereign's birthday and has been a thing in the country for over 260 years according to the paper, is a perfect way to entrall a child.

After all, the whole shindig includes a total of 1,400 parading soldiers, 200 horses and 400 musicians, the Expresss clarified.

It's such a big deal in fact that it even requires a dress rehearsal, as Twitter recently noted. So this year's Trooping is definitely going to be on my calendar. Not only will the kids' antics be fun to see, many fans hope Meghan Markle, Duchess of Sussex, may make an appearance at the event as well following the birth of baby Archie, and Marie Claire is reporting it's highly likely.

Whether or not we actually do get to see either a super-teeny Archie or his toddler cousin Louis at the event — Hello noted the Queen has never, ever missed one except during a train strike in 1955, when the occasiowas canceled — the event is sure to be worth it. And if Louis is there, all the better to see how the little Cambridge cutie is doing.