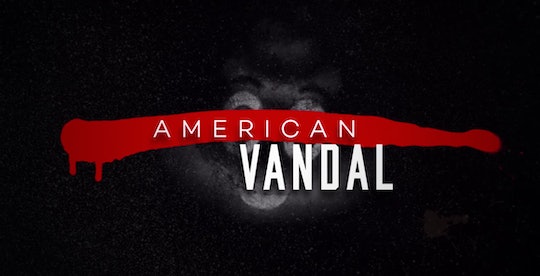 When Will Season 3 Of 'American Vandal' On Netflix Premiere?

American Vandal Season 2 only just dropped on Netflix on Friday morning. But even with eight new episodes to enjoy, already, fans are curious: when is Season 3 of American Vandal? Slow your roll, there, Vandal viewers, because the fate of the show may still be unclear at this time.

A satire of true crime shows such as Making a Murderer as well as podcasts like Serial, American Vandal is a mockumentary-style series that plays around with our "obsession" with the true crime genre by following made-up crimes committed by teenagers, The Week reported on Friday. It sounds a little ridiculous, and to be fair, it is. But that's also kind of the point.

The second season of American Vandal follows a super gross crime committed by "the Turd Burglar," and no, that's not a typo. His name makes a lot more sense when you realize what crime he actually committed.

The mysterious criminal humiliates his classmates in a Catholic school by spiking the lemonade there with laxative, which causes them to experience immediate, embarrassing diarrhea, according to The A.V. Club. "The social embarrassment is worse than the bowel movement," the outlet reported, "as a monster known as the Turd Burglar becomes an online phenomenon, tagging in everyone in videos of the worst day of their lives."

That all sounds pretty awful, but hear me out. The show is about much more than a series of silly poop jokes. For the most part. Many critics have called it a great satire of true crime drama, and not long after the first season came out on Sept. 15 in 2017 it was renewed on Oct. 26. So obviously people loved it enough to bring it back for a second season. But what about a Season 3?

Season 2 of the crime documentary parody hit Netflix on Friday, so it might seem a little early for people to be asking whether another season is coming in the near future. Fans just got another eight episodes to enjoy, after all.

But as anyone who loves a Netflix series knows, there's a true struggle in deciding whether to marathon something you love immediately or space episodes out, and there's a huge letdown inherent in finishing a season when it might be months or years before a Netflix series returns — if it comes back at all.

It took over a month for American Vandal to be renewed after its successful and critically acclaimed first season, and while a lot of people definitely enjoy it, it's not quite the hit that something like Orange is the New Black is; that show saw a three-season renewal in 2016, but that's actually a fairly rare move for Netflix, and for the ever-changing world of TV in general these days. It's almost definitely too early to know what the company is going to do with American Vandal in the future, even if the second season proves to be wildly popular.

If American Vandal somehow doesn't get a third season, fans can at least take comfort in the fact that the second season ends on "more definitive note" than the first one, according to TIME. I won't spoil it here, but Peter Maldonado and Sam Ecklund end things with a more satisfactory answer, so at least if the show doesn't return, viewers won't be left in the dark regarding the latest crime the characters investigate.

To summarize, there is no official word yet on when American Vandal will return for Season 3, if it even has one. But if this latest season of the show is popular, there's a chance fans could receive word about its fate in about a month or so, if they're lucky.