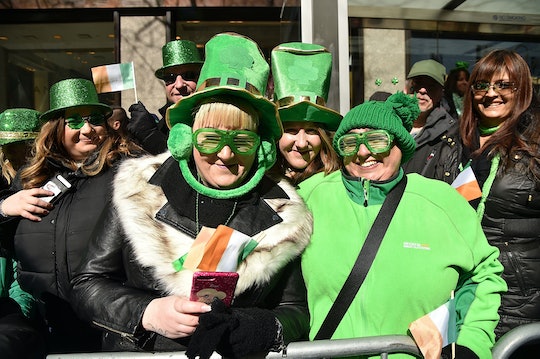 There's A Lot You May Not Know About Why We Celebrate St. Patrick's Day

Certain as the sun rising in the east, my neighborhood is starting to sprout green wreaths and Irish flags on the front doors. Our corner pharmacy has a display of light-up shamrock earrings at the register. That's how I know that St. Patrick's Day is just a short time away. Even if you're not Irish, it's still a good excuse to feel festive, because really, we need to take advantage of joy wherever we can find it.

The St. Patricks Day, which falls on Sunday, March 17 this year, honors the patron saint of Ireland, who actually wasn't Irish at all. Patrick actually came from a wealthy British family, according to National Geographic, and wasn't particularly religious. Everything changed, however, when he was 16: Kidnapped by Irish pirates and sent to work tending sheep as a slave in Ireland, Patrick had an epiphany of faith which eventually led him back to England to study for the priesthood. Returning to Ireland as a bishop, he converted thousands of pagans to Christianity. Since St. Patrick died on March 17, 461, the Church chose that date as his feast day, explained Catholic Online.

Some of the lore surrounding St. Patrick is more fiction than fact. For instance, legend has it that he showed his followers the three-leaved shamrock to illustrate the Holy Trinity (the belief that the Father, Son, and Holy Spirit are three divine beings that are also one God). However, the Old Farmer's Almanac pointed out that there are no documents to prove he ever used a shamrock in his preaching.

And the whole driving-the-snakes-out-of-Ireland thing? Totally fake news. As a classics professor told National Geographic, there were no snakes on the island to begin with, since the surrounding waters would have been too cold for the reptiles to travel from Britain. More likely, the legend is a metaphor for Patrick's efforts to eliminate paganism.

Whatever you believe about the saint himself, the intent of the holiday — to recognize the beauty of Ireland and her people — still is reason to celebrate. And we do it up with style on this side of the pond. According to Wallethub, 60 percent of Americans planned to celebrate St. Patrick's Day last year, spending nearly $6 billion on their revelry (or about $40 per person).

Throngs will turn out to watch the parades in places like New York City, the site of the oldest and largest St. Patrick's Day parade in the world, and Chicago, which honors the day by temporarily dyeing the Chicago River green.

At the very least, more than 83 percent of us will be wearing something green as a show of support. But surprisingly enough, St. Patrick's color is actually blue, according to Time. It wasn't until the 1798 Irish Rebellion, an uprising against British rule, that people began to wear green to show support for Irish independence.

And yes, more than a few of us will be hoisting a pint or two in honor of the occasion. Wallethub's 2018 stats included the impressive fact that 13 million pints of Guinness will be downed worldwide on March 17, an 819 percent jump in consumption from the rest of the year.

Keep it classy, however, if you don't want to insult the true spirit of the Emerald Isle. As this essay from Irish Central explained, Irish natives grit their teeth when they see T-shirts with drunk-Irish stereotypes and inappropriate innuendos, not to mention people using the feast day only as an excuse to get wasted. (My Irish-heritage husband refuses to enter a bar on St. Patrick's Day; he calls it "Amateur Night.")

However you plan to celebrate St. Patrick's Day, may the wind be ever at your back and the luck of the Irish be with you!