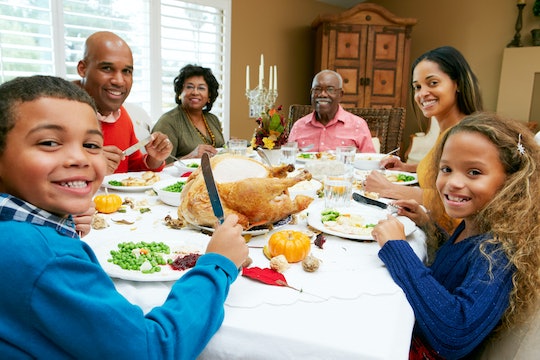 So When Is Thanksgiving 2019, Anyway? It'll Be Here Before You Know It

Halloween candy and decor have given way to frozen turkeys, canned cranberry sauce, "Harvest Blessings" signs, and Pilgrim placemats. If, like me, you feel like each passing year goes by even faster than the one before, you're probably shaking your head at the thought that we're almost done with 2019. You're probably also double-checking to find out when Thanksgiving is this year, remembering all the times when the date caught you unprepared.

The good news: We have a few weeks to go. Thanksgiving 2019 falls on Thursday, November 28, according to the federal Office of Personnel Management, which gives us plenty of time to do some advance shopping. (I've already bought two boxes of Trader Joe's yummy cornbread stuffing, thank you very much.)

As to why this holiday exists: As the History Channel website explained, the idea of celebrating a feast of gratitude once a year or more slowly started to take hold across the colonies following the big three-day harvest feast in November 1621. In 1789, George Washington issued the first U.S. federal proclamation of a day of thanks, in honor of the country's independence and the ratification of the Constitution. By the early 1800s, individual states began to establish yearly Thanksgiving holidays, but there was still no official national date that all citizens could observe together.

In the end, it wasn't a Founding Father that helped create a national Thanksgiving, but a very determined woman named Sarah Josepha Buell Hale. As the Pilgrim Hall Museum website explained, Hale, a prolific writer and editor, was the literary editor of Godey's Lady's Book when she first proposed that a national Thanksgiving be observed each November, suggesting the last Thursday of the month.

Starting in 1847 and continuing for more than 20 years, Hale published annual editorials calling for a national Thanksgiving Day. She sent petitions to state governors and military leaders, with no luck. Finally, she appealed to President Lincoln in September 1863, who saw it as an opportunity to try bringing together the divided nation. On October 3, he created the first presidential proclamation establishing the last Thursday in November as a national holiday, according to the Center for Legislative Archives.

Even this wasn't the last word on the subject. Andrew Johnson briefly moved the national day of thanks to early December (Hale set him straight on that point), and it wasn't until 1871 that Thanksgiving Day was formally established by an act of Congress. Then, in 1939, FDR shook up tradition yet again by rescheduling Thanksgiving to the second-to-last Thursday in November. As Time explained, Roosevelt was catering to the retailers who felt an earlier holiday would translate to more Christmas shopping sales. No one liked the change, however, so in 1942, the president switched Thanksgiving back to its old spot.

We can only hope that the current administration (and any future ones) won't decide to mess with the official Thanksgiving date again. It's hard enough to remember the one we already have. Assuming that we'll be sitting down to turkey dinners on the fourth Thursday in November for the foreseeable future, you can program your phones for upcoming years: In 2020, Thanksgiving will be on November 26. (You're welcome. Just leave an extra box of cornbread stuffing on the shelf for me.)

This article was originally published on Oct. 25, 2018