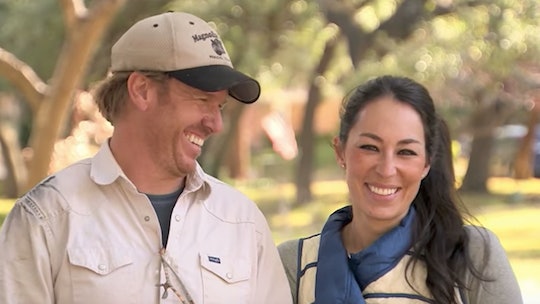 The Countdown To The Series Finale Of 'Fixer Upper' Has Begun

Now that the shock that this is the final season of Fixer Upper has finally (mostly) worn off, it’s time to focus on the fact that at least Chip and Joanna Gaines are giving fans a proper farewell from their original series before their spinoff, Behind The Design, premieres in 2018. But since you’re going to watch it as it airs and it’s going to come to an end regardless, when is the Fixer Upper Season 5 finale?

Season 5 kicks off this week on Tuesday, Nov. 21 in its usual time slot of 9 p.m. EST. Since HGTV announced that there will be at least 14 episodes, along with four specials, for the show's final season, then fans can most likely expect the actual Fixer Upper Season 5 finale to air sometime in March 2018. Granted, this is just a prediction on my part, based on how many episodes are expected to air. However, no official finale date has been set just yet.

With Season 4 having spanned 16 episodes, Season 5 is definitely going to end the series in a positive way. For fans who have been with Chip and Jo from the beginning, or at least binged on some of their seasons more recently, you can expect Season 5 to really feel like its last. In October, Jo posted a photo from behind the scenes of Fixer Upper with Chip and the crew and it brought tons of nostalgia with it as she wrote in the caption: "Today we got to take a walk down memory lane with the crew... remember this house?! This was the first home we shot for our #fixerupper pilot episode five years ago! My how time flies."

Hopefully this means that Season 5 will revisit some of the best moments of the series as a whole, even if it’s more of a sporadic things than a clip show format. The final season will also likely bring the feels hard, since most fans have been with the Gaines family through countless home renovations and multiple Chip hairstyles and beard lengths. This hasn't been just a show where a couple of home renovators help a couple find a house and that’s it. Instead it’s been about helping people create their dream homes, while adding personal touches and making viewers love Chip and Jo as a couple and as a team.

On their blog for their company, Magnolia, they wrote about the upcoming final season of Fixer Upper and made it clear that fans should expect an emotional but fulfilling final chapter of the home renovation series:

We are really, really proud of season 5. We laid it all on the field and didn’t hold anything back. We think it’s the perfect finale to this amazing journey we’ve been on. Season 5 begins in November and Behind the Design will follow shortly after. There’s so much good, new stuff coming your way!

They also added that despite being finished with Fixer Upper after Season 5, they aren’t finished renovating homes by any means. After the Season 4 finale back in March 2017, viewers got to see a preview of what Behind The Design will be like, and although the spin off isn’t going to be exactly what fans have been used to for the past several seasons, it does mean that Chip and Jo aren't going anywhere, even if the couple is moving on to another project for HGTV.

Viewers should expect the Season 5 finale to air sometime in March or April 2018, but with Behind The Design following closely behind, they won’t have to wait long to watch Chip and Jo make all things beautiful again. Basically, we’re not going to be without the Gaines’ creativity and design anytime soon, and that’s all that really matters.