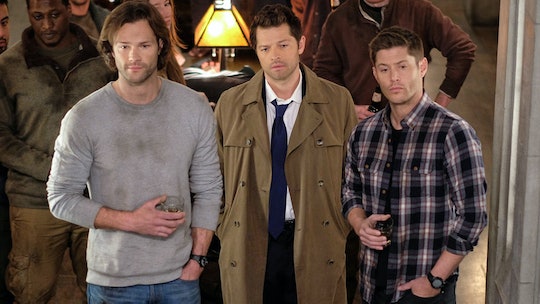 It finally happened. Though it remains the final show standing from The WB's glory days and continues to exceed expectations with audiences on The CW, Supernatural is coming to an end. Naturally, fans are wondering when the last season of Supernatural will air. Because TBH, everyone thought this show was going to ride off into the sunset and no one is ready to see a series finale just yet.

On Mar. 22, Misha Collins, Jensen Ackles, and Jared Padalecki posted an 83-second video to tell the world that the fifteenth season would be the final season of Supernatural.

"We just told the crew that although we're very, very excited about moving into our 15th season, it will be our last," Ackles told fans in the video. "15 years of a show that's certainly changed my life. I know it's changed these two guys' lives. And we just wanted you to hear it from us, that though we're excited about next year, it will be the finale. The big, grand finale of an institution."

Though, despite Season 15 being Supernatural's last, the trio promised that they would give the final season their all.

"We cried some tears and we'll cry some more," Padalecki said in the video. "We'll work all of the emotion into next season."

According to Variety, the final season of Supernatural will have 20 episodes, the same number of episodes as Season 14. Prior to the cancellation announcement, The CW series was also renewed for Season 15 back in Jan., alongside other hit shows like Legacies and Riverdale.

That said, the network has yet to release details in regards to their fall 2019 schedule. So fans won't know when Supernatural Season 15 will premiere just yet. Nevertheless, there's a significant chance that the last season of Supernatural will begin airing in early October, as it has done so since Season 8.

If The CW decides to premiere Season 15 of Supernatural in Oct., then considering its 20 episode count, the last season will likely follow the timeline of Season 14, which airs its finale on Apr. 25. So it's possible that fans will say goodbye to Supernatural with its series finale air date sometime in late April or early May 2020.

However, nothing is confirmed and fans will have to wait for an official announcement to know for sure.

"We wanted to communicate to you guys that this was a community decision," Padalecki said, according to Cosmopolitan. "The network and the studio didn't say, 'get out of here, you guys are done."

Ackles also explained why they chose to end the series. At the panel, he revealed:

It wasn’t an easy decision. It was months and months, if not years, of discussion between he and I, between the rest of the cast, between the crew, between our writers, between our producers, between the studio, between the network. Nobody wanted to see this show fizzle out. I think that it was everyone wanting to do the biggest service to the show that we could by going out strong. It just seemed like the writing was kind of on the wall as to when that was happening. Everybody kind of felt that it was coming soon, and so it was just taking that leap of faith of going like, ‘Well guys, let’s get out the paint and paint that finish line because what we’ve accomplished is unlike any other.'

I'm not crying, you're crying. Supernatural might be ending soon, but the fans — I mean family — will live on. And regardless of what happens in the final season, just remember... we're all going to hell. Might as well enjoy the ride.