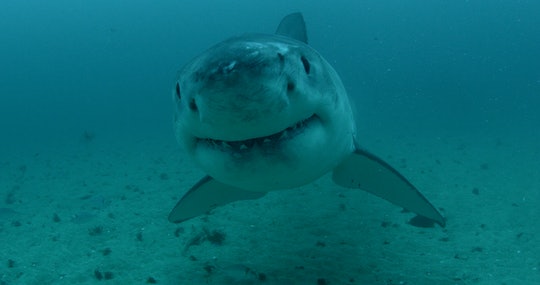 The Shark Week Crossover You've Been Dreaming Of Is Here

The special is scheduled to air on Sunday, July 29 at 9 p.m. and it'll be two hours long. If you're what exactly this show will entail, it's pretty much what it sounds like. Former Naked and Afraid participants are stranded on a barren island in the middle of the most shark-infested waters on Earth. The island is located in the Bahamas, but rather than find the resources they need to survive on land, they'll have to venture out into the water to find food.

This time around, the participants will be given fishing equipment, but all the rest of the standard Naked and Afraid rules apply here. The participants will be totally naked and have to deal with the intense heat on the island, along with volatile afternoon thunderstorms and unforgiving blood-sucking insects.

Before just setting the participants out on their own, they will get the chance to talk with a shark expert, Tristan Guttridge. Guttridge briefs the participants with some words of caution, detailing how there are 40 different species of sharks in the Bahamas. The participants for this special include Ky Furneaux, Ryan Holt, Chris Fischer, Steven Lee Hall, and Eva Rupert. Even though all five of the participants have done Naked and Afraid before, this is obviously a much different experience. It'll be interesting to see how they handle the challenge, and who calls it quits first.

In addition to the Naked and Afraid special, the Discovery Channel is also bringing in a number of celebs and athletes for a lot of different specials. You'll see Ronda Rousey, Aaron Rodgers, Lindsey Vonn, Rob Gronkowski, and more appear during Shark Week. Survivalist Bear Grylls will also have his own special, Bear vs. Shark, in which he'll partner with a shark expert to learn how to safely swim with sharks, tag sharks for tracking and study, and free sharks from nets and hooks. He'll also test a theory that could change the way humans interact with sharks.

There will also be another TV crossover. The "sharks" from Shark Tank will also have their own special. The sharks, Barbara Corcoran, Mark Cuban, Daymond John, and Kevin O'Leary, will each be paired up with an oceanic organization to uncover the issues they're facing, discovering threats of habitat destruction, overfishing, bycatch, and more. Then, the sharks, along with fellow shark Robert Herjavec, will pitch each other on why their organization deserves the big prize, which is a donation of $50,000 to the shark-saving cause. Each shark will cast their vote for the organization they think is the most deserving, though they'll be unable to vote for their own.

Thus, Shark Week will surely be packed with a lot of great specials to watch. Whether you've been obsessed with Shark Week since the very beginning or have never been into it before, now's the perfect time to tune in. This year Shark Week will run from July 22 to 29, and as always it's sure to be the Discovery Channel's biggest event this year. So make sure to check it out.