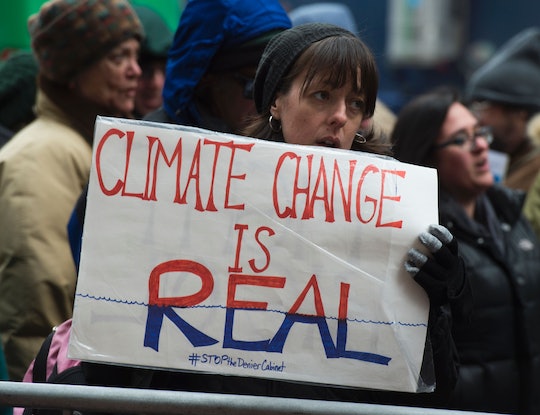 A Climate March Is Headed To Washington

I believe we may well be revisiting the Age of the March. After the unprecedented (unpresidented?) success of Women's March on Saturday to protest the incoming Trump Administration, other marches are being planned. Because other issues are afoot: Most recently organizers announced an upcoming People's Climate March to protest President Trump's anti-climate policies. So when is it, and how can you get involved?

The Sierra Club, one of the organizations hoping to encourage citizens in major cities across the country to put on their marching boots again, announced on Wednesday that it plans to sponsor the march on April 29 in Washington D.C. It's hoping to galvanize more cities to join the movement as well. Sierra Club Executive Director Michael Brune released a statement about the march, and the significance of Apr. 29 (the Saturday before President Trump's 100th day in office):

On April 29th, it’s going to be much clearer to Donald Trump that he won’t drag America or the world backwards on climate without the fight of his life. Our planet is in crisis, and voices from around the nation must and will be heard.

The Sierra Club was founded by conservationist John Muir in 1892, and has grown to become one of the most influential environmentalist groups in the country. According to its website, the Sierra Club has over two million members, and has helped to pass the Clean Air Act, Clean Water Act, and Endangered Species Act.

The People's Climate Movement was formed in 2014, and the first march was held on Sep. 21, 2014 in New York City just ahead of the United Nations climate summit. More than 400,000 people marched that year, and a movement was born.

There is no denying it: Donald Trump’s election is a threat to the future of our planet, the safety of our communities, and the health of our families.

This new administration is attacking the hard-won protections of our climate, health, and communities, and the rights of people of color, workers, indigenous people, immigrants, women, LGBTQIA, young people, and more.

If the policies he proposed on the campaign trail are implemented, they will destroy our climate, decimate our jobs and livelihoods, and undermine the civil rights and liberties won in many hard fought battles.

President Trump has long been a climate change denier, and since he was sworn in to the Oval Office on Friday, there have been reports from employees of the Environment Protection Agency (EPA), and the departments of the Interior, Agriculture, and Human Services, that Trump was hoping to curtail the information they would be sharing with the tax-paying public. Each of these departments were asked to remove web pages sharing scientific facts, and limit their social media access. Since those reports, a variety of "rogue" Twitter accounts from alleged former workers within the national parks system, the EPA, and NASA have cropped up in defiance of the so-called "gag order."

And so, in support of these employees who refuse to be silent, and in defense of our environment... slap on your FitBit in April and get marching.