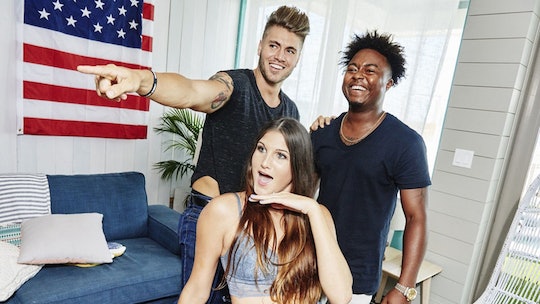 So Much Drama Happened This Year On 'Floribama Shore'

Season 1 of Floribama Shore kicked off with a total of eight episodes, an order that was nearly doubled for Season 2. Some might argue it's a good thing MTV upped the number of episodes in light of the drama that happened this season, especially where it concerns Kortni Gilson and Logan Fairbanks' relationship. From hookups to a pregnancy scare, a lot has gone down. And if you are eager to see how these storylines will end, there's a good chance you want to know when the season finale of Floribama Shore will air.

In case you haven't noticed already, Floribama Shore is a hit. Want some proof? The Season 2 premiere episode scored about 1 million viewers, a ratings high for the show, as Deadline stated. Impressive stuff, right?

Unsurprisingly, the ratings continued to soar throughout the season, a trend that was likely inspired by the show's dramatic plot lines. I'm talking Kortni's pregnancy scare, a kissing scene between Nilsa Prowant and Gus Smyrnios, and an epic fight involving Codi Butts and Jeremiah Buoni.

Nilsa said about the wild season, according to Elite Daily:

I think you can expect Season 2 to be way wilder than the first time, way more hookups, way more fights... And then, also last summer I don’t feel like the viewers got to know every single one of the cast members. And this summer I feel like they're gonna get to know every single one of us through and through, which is what we did with each other. Last summer we didn’t really know each other and we didn’t really wanna open up or let our walls down, because we didn’t know each other. And so, this summer there was a lot more opening up.

Spoiler alert: the cast members did let their walls down. And towards the season's end, fans had a lot of questions, like: Will Nilsa and Gus finally hook up? Are Kortni and Logan done for good? And what will happen between Candace Rice and her boyfriend, Gator (yes, there is a man on this show who goes by Gator)?

As for when viewers can expect to have these questions answered? It looks like there's a chance the final episode will air Monday, Oct. 8 on MTV. Although the finale episode — aka episode 14 — doesn't have a title yet or has been confirmed by MTV, episode 13 is a go. The episode is called "Scorn in the Bayou," and it will entail, according to TV Guide:

When Jeremiah returns to the beach house, the roommates surprise him with a road trip to New Orleans. Candace is forced to face an incident with Gator Jay that she had hoped to keep in the past.

As for the time? Viewers should tune in at 10 p.m. EST. if they want to get in on the action.

It's expected the Season 2 finale will rake in the ratings given its wild success this year. And there's no denying fans absolutely love this show.

"My favorite people are back on and my Monday night is so much better now i love floribama shore!!" one fan tweeted. "This show literally makes every Monday night better!!"

Another person chimed in: "Floribama shore is def one of my top 5 favorite shows."

"3 more episodes... i might just cry, this has been the best show, recommend to anyone...hope for more, Love Y’all," someone else added.

Yep, there's no denying people really enjoy this series, and I don't doubt many people will tune in for the Season 2 finale.