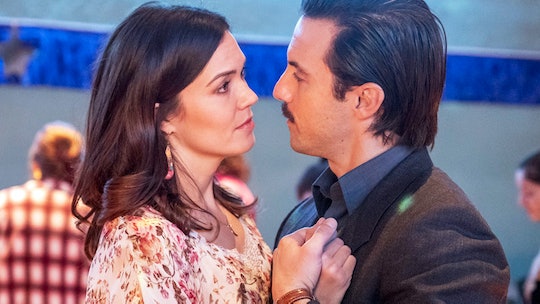 No, I'm Not Emotionally Ready For The 'This Is Us' Season 3 Finale

Like the first and second seasons of This Is Us, Season 3 consists of 18 episodes total. However, due to a short hiatus caused by the rescheduled State of the Union speech on Feb. 5, the later half of Season 3 was subsequently pushed back a week, starting with "Songbird Road: Part Two." According to Deadline, the delay also caused the highly anticipated This Is Us finale to be postponed to another date. The finale, which was originally scheduled to premiere on Mar. 26, will now be aired on Tuesday, Apr. 2 at 9 p.m. ET.

Although the last few episodes of the third season will come to fans later than expected, the team promised a "gigantic" finale at the This Is Us PaleyFest panel.

Inside the Los Angeles Dolby Theatre on Mar. 24, members of the This Is Us cast and show creator Dan Fogelman took the stage at PaleyFest for the second time in three years. While Entertainment Tonight teased that fans got to see the Mar. 25 episode, "R & B," it was news of the Season 3 finale that stole the show.

"We have all of our storylines building to that in the last episode," Fogelman revealed, according to Variety. "It’s kind of gigantic. The last five minutes of the episode are sprawling.”

The series creator also explained that the big flash forward scene from Season 2 will "be a big part of" the season finale, which ultimately leads up to the events coming in Season 4.

While This Is Us Season 4 has yet to receive an official renewal announcement by NBC, Fogelman has been vocal about his sights for the upcoming season, including the arrival of one major character: Rebecca's father. As reported by Variety, Fogelman revealed that Rebecca's dad will “be a prominent part of the show.”

Fogelman also admitted that he has already written the Season 4 premiere episode and he is just as excited for the season as he was for the pilot.

“It’s going to be good,” Fogelman said, per Deadline. “The world is gonna expand in an interesting way…we have a plan.”

Excitement for the potential of a new season aside, there's still plenty to be worried about. When asked about what's next for the Pearson family in This Is Us Season 4, Justin Hartley, who plays Kevin, simply stated, “Everyone is not okay.” Yikes.

There's plenty to dissect from the This Is Us PaleyFest 2019 panel. But there's one thing we know for sure. The Season 3 finale is going to be big. And yes, it might even be bigger than the Big Three.