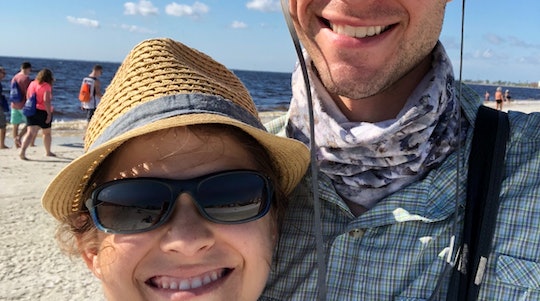 Jackie and her husband have been trying since late 2016. She suffers from hypothalamic amenorrhea, and this is the sixth installment of her Trying diary. You can read the previous entry here.

Thank the Lord, we have a plan. But one thing stands in our way from getting this assisted reproductive party started: German measles.

Specifically, my lack of immunity to German measles, also known as rubella.

The day after returning from 10 days in New York sans-JP (he had no interest in spending money and time off to go to a baby shower, even if it was Jack and Jill), I had my long-awaited appointment with the reproductive endocrinologist (RE).

It was good news and bad news. I had gained weight, but not enough in his opinion. He wants me to go to a shrink to deal with the underlying stress and body image issues because that’s what is holding me back.

He can get me to ovulate, he says, but can I handle the weight gain if I do get pregnant? Am I going to harm the baby with destructive behaviors? No, I promise. I am in a much better place; not perfect, but much better. If only we can get my body to trust me.

But the doc is realistic. It’s been a year and nothing has happened, really. Insanity is doing the same thing over and over and expecting different results. I agree.

The next logical step is pretty clear: inject myself with the ovary-stimulating hormones my brain refuses to produce and, if all goes well, I don’t create too many eggs and I have a decently thick uterine lining, we pull the trigger and do an intrauterine insemination (IUI). In JP’s terms: “turkey baster.”

At first, he was pretty against the turkey baster. “I can take care of that myself, thank-you-very-much,” was essentially the response. But my thought was why not give ourselves an extra shot in that magical 24-48 hour window? Even the Navy SEALS can only bring in reinforcement swimmers so fast.

IUI is also not really aligned with my religious upbringing, either. But novenas and Marian devotions ain’t workin’ right now, so I will embrace my cafeteria Catholicism at this point.

Yes, the hormones will suck. Yes, I will be poked and prodded way beyond my comfort level. And I will have to stop exercising. But it’s the best possible option in the current circumstance.

What has won both JP and I over is the math. My RE is known to be the best fertility doc in Southwest Florida for good reason; he has the stats to show it. A woman under the age of 35 doing injectables has had a nearly 40 percent success rate in the past five years in his office. That’s about twice the rate of the “au natural” route for people with functioning reproductive systems.

The doc warned me that my history and low body weight put me at higher risk of miscarriage — all the more reason to keep trying to keep stress low and get my body functioning again — but the risks are worth it for us.

My insurance allotment for fertility treatments should fully cover two or three cycles, but hopefully we won’t need that. Yes, the hormones will suck. Yes, I will be poked and prodded way beyond my comfort level. And I will have to stop exercising. But it’s the best possible option in the current circumstance. We’re ready. We’re in. Now.

But about that German measles thing.

Among the eight zillion tests they did the first time I went to the RE was a titer test, which checks for immunity bunch of different diseases that would be bad to have while pregnant. Lo and behold, the R in the MMR shots I got as a kid didn’t decide to come along for the ride or got lost in the succeeding years.

Whatever happened, I need to get re-immunized before we can move forward. Doctor’s orders.

OK, so I go, get the shot (word to the wise: don’t go to the gym for an arm pump beforehand unless you like being stabbed multiple times because the nurse can’t get the needle to stay in the muscle). We’re good, right?

Not so fast. Rubella is a two-shot series, done at least 28 days apart. And then you are not supposed to get pregnant the month you get the second shot. Add that to JP’s scheduled tour of duty on the border, we’re talking November when we can get started.

We have a plan. But thanks to my stubborn immune system, we still have to wait.