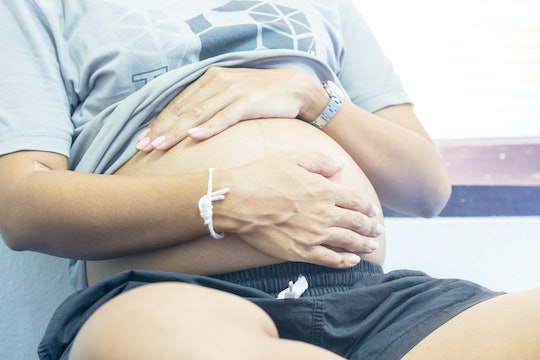 When "Normal" Pelvic Pain During Pregnancy Is A Concern, According To Experts

Pregnancy is 40 weeks, more or less, of odd back aches and pelvic pains that, while annoying, are somewhat typical. But when is normal pelvic pain during pregnancy actually normal, and when is it something that should be further evaluated?

First and foremost, it's important to remember that every pregnant person is different and will have their own, individualized pregnancy experience. It's also important to remember, as Bahlani tells Romper, that "we don't do a lot of data [collection] during pregnancy, since it is such a tender time." In other words, there's a lot even the experts aren't perfectly clear on regarding why something might be hurting.

And yet the general rule of thumb on most pelvic pain during pregnancy is that if it's intermittent, not severe, or accompanied by other symptoms, and goes away, it's probably typical and not something to worry about. But, as Green tells Romper, even though most women will experience pelvic and/or lower back pain in pregnancy, "It’s important to realize that pain can be your body’s way of sending a 'warning sign' to the brain that something is not right or something requires your attention."

It's also crucial to take into account what stage of pregnancy you are in to get a better idea of whether what you're feeling is "normal." Something that's perfectly common in the first trimester, for example, might be troubling in the third.

In the first trimester, for example, a common complaint (and worry) is cramping. "It's a very common symptom," Bahlani says. "The only time we would worry about this symptom is if it's accompanied by vaginal bleeding or other associated symptoms, such as nausea or vomiting." And while nausea and vomiting are common during the first trimester, Bahlani says when accompanied with pain a more thorough examination is in order to rule out a potentially serious issue, such as ectopic pregnancy or even appendicitis.

Green adds that while pelvic cramping or discomfort is common, sharp, severe cramping is a point of concern. "Miscarriages are common during the first trimester and severe pain, with or without bleeding, could be a sign of miscarriage," she says.

The second trimester will most likely see an end to most cramping, but that doesn't mean pelvic pain stops there.

"Oftentimes, the second trimester is when a lot of women will complain about one-sided pain. We call that round ligament pain," Bahlani says. "Round ligaments refer to the structures in the pelvis that support the front of the uterus. As the pregnancy progresses and the uterus expands, those ligaments stretch, which can be painful and felt deep in the groin. It is generally made worse with movement and better with rest and, barring other symptoms is annoying, sometimes jarring, and very normal."

We have to do a better job than, 'Here's your new body, go live with it, deal with it, and here's a baby, too.'

Green says that, in addition to round ligament pain, low back and pelvic girdle pain may be more common in the second trimester. "Women who experience low back or pelvic girdle pain should seek help from a physical therapist, who can help them find more efficient ways to move, or provide stretches and certain exercises that will help." A 2019 study published in BMC Pregnancy and Childbirth followed 1,284 pregnant women in Nepal, and found that 34% experienced lower back pain or pelvic girdle pain so, again, it is not uncommon.

The third trimester is what Bahlani describes as a kind of a no man's land. "We tend to evaluate everything in this trimester," she says, due to the risk of preterm labor. She also says that all cramping, while potentially no more than Braxton Hicks contractions will likely be further examined. She also says that lower pelvic pressure is also quite common and "once evaluated, is generally not something to be worried about."

Green also says pelvic pain during pregnancy could be pubic symphysis dysfunction, a musculoskeletal issue caused by a misalignment of the pubic symphysis, a cartilaginous joint basically in the middle of the front of your pelvis. "Women with pubic symphysis dysfunction often complain of pain in the front of the pelvis that is typically sharp. They will have trouble walking, lifting a leg and turning in bed," she explains. While not strictly-speaking typical, it is nevertheless common in pregnancy, particularly in the third trimester.

"Women who experience this pain should seek help of a physical therapist (PT) as PTs can provide strategies to move without pain," Green says. She notes that since an obstetrician's approach to pregnancy is necessarily more holistic — focusing on the general health of mother and developing fetus — musculoskeletal pain, while common, may not be an area of expertise. In many cases, an OB-GYN may assume there's nothing to be done for pelvic pain, but that may not always be the case. "Fortunately, in most states a woman can see a physical therapist without a referral from a doctor, so while I would recommend letting your doctor know, or asking for a prescription, know that if for some reason that is not possible, a woman can still have musculoskeletal pains assessed."

While any pain should always be addressed mindfully and cautiously, chances are that most twinges and pangs are all part in parcel to a changing body sustaining another living being. That doesn't mean you have to live in pain, though.

"Get help!" Green says. "Physical therapist trained in pre- and postnatal rehabilitation will be able to help. ... Even if the pain may go away, women should not have to function with pain during pregnancy."

Bahlani agrees. "Anything that's affecting [a pregnant person's] quality of life, in my opinion, shouldn't be dismissed," she says. "Even if it's just addressed via counseling, it should be addressed. ... We have to do a better job than, 'Here's your new body, go live with it, deal with it, and here's a baby, too."