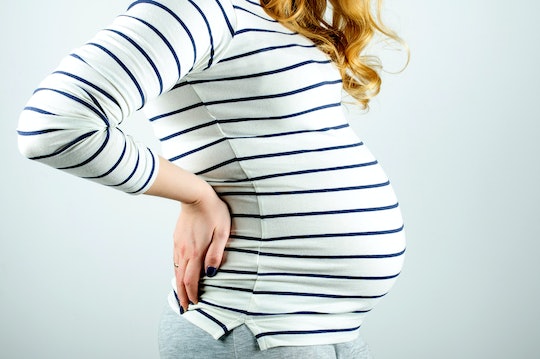 7 Signs Of Symphysis Pubis Dysfunction, According To A Pelvic Pain Specialist

When I was pregnant, I was constantly learning about new, weird, painful, and terribly annoying stuff that could or was happening to my body. Bleeding gums? Normal! Shortness of breath? Normal! Outlandish sex dreams involving celebrities I didn't even know I was attracted to? Somehow also normal! It's been five years since I was pregnant, and I'm still learning about the ailments that plague my gestating cohorts. The latest? Symphysis Pubis Dysfunction (SPD). As in, what are the signs of symphysis pubis dysfunction? Hell, what, exactly, even is it?

Romper spoke with Dr. Sonia Bahlani, M.D., an OB-GYN and pelvic pain specialist, to learn more about this common ailment with a not-so-commonly discussed name.

The main symptom in SPD is pain, which can range from mildly uncomfortable to sharp and debilitating. So what causes this pain? "There's a misalignment in the pelvis usually due to some sort of excessive movement of the pubic symphysis," Dr. Bahlani explains, which is a cartilaginous joint basically in the middle of the front of your pelvis. "It's moving a little bit more than it should that's what causes the pain and discomfort in the pelvic region."

This misalignment can be caused by any number of issues, among them the hormone relaxin, which sounds hilarious and made up but is actually a thing. Relaxin makes your ligaments less tense — relaxes them, if you will. This is great overall, because it means your body isn't going to split in half as your baby grows or makes its entrance into the world. Too much relaxin (or, too much too early), however, can loosen the ligaments around the pelvic bone, creating instability in the pelvis and, in turn, pain. Some people, Dr. Bahlani suggests, likely experience misalignment before pregnancy, but are able to compensate for it pretty seamlessly so they only notice it during pregnancy, when compensating becomes more difficult.

The good news is that, barring extreme cases, SPD shouldn't affect your ability to give birth vaginally (if that's your jam) and is usually resolved without major interventions. But how do you know you might have it? And what can you do about it?