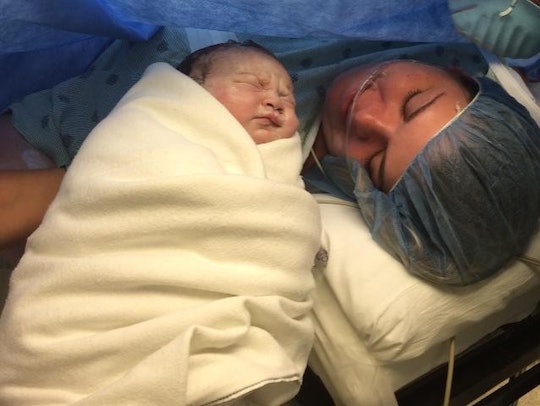 Why You Shouldn't Feel Bad About Having A C-Section

I tried to go with the flow when I was pregnant with my daughter, but I was adamant about wanting a non-medicated, vaginal birth. Instead, I had a C-section with a spinal block, a decision made about 30 minutes after I was admitted to the hospital. It was easy to get wrapped up in the guilt of a C-section and the disappointment over my delivery, and I know I'm not alone. But if you're struggling with your delivery, know that there are plenty of reasons why you shouldn't feel bad about having a C-section.

According to the Centers for Disease Control and Prevention, Cearean births make up 32.2 percent of deliveries here in the United States. That's a pretty big number, but the stigma against C-sections hasn't disappeared with the increase of deliveries. In some cases, it seems to have gotten worse. Fit Pregnancy noted that too many mothers are having unnecessary C-sections, but regardless of why someone chose it, is it anyone's place to judge a C-section? What about those who had no choice? C-sections can save lives, but when you feel like you didn't have to work for your delivery, when you don't get the feeling of your baby on your chest and the ability to wrap your arms around them, and when you aren't able to get out of bed to change your baby's first diaper, it can feel like you're on a guilt trip that never ends.

But, say it with me, mamas — you shouldn't feel guilty about having a c-section. In some cases, like mine, it could have saved your life. But it also could have saved your baby's. OB-GYN Amy Tuteur told Parents that a vaginal delivery actually poses a risk 1000 times higher to the baby than it does to the mother. But C-sections pose a greater risk to moms and a dramatically reduced risk to the baby. In fact, Tuteur sums it up beautifully by arguing that deciding to have a C-section isn't easy. Sure, some babies could be born without it, but her argument is that any mother who chooses to have a C-section is essentially saying, "I'm not sure if my baby can be born vaginally, and I'm not willing to risk their life."

How's that for banishing guilt?

In fact, according to Time, C-sections have done more to save the lives of both mothers and children than any other procedure out there.

When you think about it like that, your C-section could have been the best possible outcome for your child. I had preeclampsia and low platelets when I was admitted into the hospital. My choices were there, at first. I could be induced and try to have a vaginal delivery, but complications might end up sending me to the OR anyway. I was at risk of hemorrhaging and hypertension — there was only one choice to make. The sooner my baby was out of me, the safer both of us would be. Did a C-section mean possible issues for me? Of course. According to the Children's Hospital of Wisconsin, a Cesarean birth loses twice as much blood as a vaginal birth. But when you're worried about your baby, you'll do absolutely anything to keep them safe.

And there's no reason to feel bad about that.