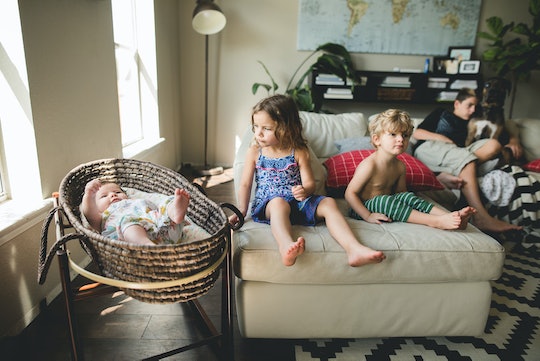 Big Families Are Only For The Rich

In the course of interviewing mothers about the lack of affordable, available, quality child care in America, I kept hearing something else. In addition to the daily stresses, person after person told me that the costs of care had forced them into having less children than they wanted. These weren’t women in crisis, either — these were college-educated, married 30-somethings in two-earner families. Yet one woman responded that thanks to child-rearing expenses, “I've totally washed away the dream of having one more child.” Another wrote, “we've gone from a couple that once swore we'd be a three-kid family — we both would love to have three — to one that's seriously contemplating stopping at two.”

The American birth rate has plummeted over the past decade, largely due to stories like these. The overall “fertility rate” (an estimate of average births per woman) is at a near-unprecedented low, down to 1.76, per the CDC, and the decline is occurring across all racial and geographic groups. To put that in context, the “replacement rate” of births per woman needed to keep the population stable is 2.1. The drop has been sharp — we were at the replacement rate as recently as 2006. Yet this decline is not about millennials opting out of parenthood; though women are having babies later in life, the percentage of women never having children has only nudged upwards. Instead, the drop in the fertility rate is due to the death of large families. In 1976, only 35 percent of mothers finished their childbearing years with one or two children, while the rest had three or more, according to Pew Research data. Today, it’s 62 percent.

There’s nothing inherently better or worse about a given family size. My wife and I are quite content with our two daughters, and couples may struggle with infertility or other limiting factors. When these trends are applied on a national scale, however, population economist Lyman Stone is stark about the consequences in a piece for Vox, writing:

“The future depends on finding some way to keep American population growth up. If we fail, putting it plainly, the future will include insolvency of our social aid for the elderly and the poor, a permanent decline in economic dynamism, huge swaths of the country locked in intergenerational economic depression and an ever-increasing burden on women in particular, as family life becomes less compatible with a career.”

The problem, restated, is that many American couples aren’t having enough babies despite wanting them. In fact, the overall desire for larger families is increasing. In 2018, fully 41 percent of those surveyed by Pew said that the ideal family size was three or more kids, the highest answer to that question in 20 years. Despite this, family sizes are shrinking while one in four couples reported in a New York Times poll that they have, or plan to have, less children than is their personal ideal.

Except for one group. In recent years, the straight line decline has started to take a sharp turn back upwards when you get to the wealthy.

There’s even an uncomfortable status symbol component at play

The rich are the only ones having more babies than before, which gives away the game as to why everyone else is having less. Reversing the conventional wisdom that it's the poor who have the most kids, the greatest relative share of three-child households actually now lies with families making over $500,000 a year. One set of researchers, Moshe Hazan and Hosni Zoabi, dubbed this phenomenon the “U-shaped fertility” curve (in other words, the very poor and very rich are having the most children). Another way of looking at this is that the most highly-educated mothers — a proxy for affluence — are suddenly defying historical patterns of having the lowest birth rates; when you break down the data by educational attainment, they’re now the group with the fastest-growing family sizes.

Why? Because they’re the only ones who can afford to.

Of those couples who said they’re having less kids than they want, the number-one reason given — by fully two-thirds of respondents! — was that “child care is too expensive.” And is it ever. Child care costs take up a median of 30 percent(!) of family income and continue to rise even as supply dwindles; annual costs for two children in center-based care can easily exceed $25,000, per a New America report. Since every additional child resets the five-year clock until public school age, the financial incentive is mighty for keeping family sizes small.

Meanwhile, Hazan and Zoabi concluded that among the affluent, “highly educated women substitute a significant part of their own [provision of parental child care] with [outside] child care. This enables them to have more children and work longer hours.” There’s even an uncomfortable status symbol component at play for some: a 2014 New York Times article on the growth of three-child families among the wealthy set in New York City quoted one father as saying, “At some level, the third child is a proxy for having enough wealth to have a very comfortable life.”

There is, of course, nothing at all wrong with utilizing outside childcare. Depending on the state, between half and two-thirds of American children have all of their available parents in the workforce and therefore require outside care. The difference is that the wealthy can shell out for these insane costs, while everyone else has to have a grandparent nearby, be able to absorb a parent staying home, or literally just have less children. Income inequality is an inescapable part of this story. Previously, dips in the birth rate have come along with economic recessions but then bounced back. This time, the economy has rebounded from the Great Recession, but as wages stagnate, debt piles up, and the accessibility of outside care gets increasingly slimmer, the birth rate continues to nosedive.

The only logical conclusion is completely reenvisioning the U.S. approach to family support (and, arguably, economic policies writ large). If even two-earner middle-class families are having fewer kids because they can’t afford them, it’s a societal imperative to make sure they can. Paid family leave, a robust annual child benefit, and/or publicly funding child care expenses as we do K-12 education are among the most direct and promising policy options.

This is not some flight of fancy. There are precedents: other countries such as Australia and Spain have seen significant boosts in their fertility rates from utilizing family support policies, and these policies have a way of paying for themselves through increased productivity and maternal employment. Nor is the cost of addressing the problem prohibitive: according to the Congressional Budget Office, merely implementing a 0.1 percent tax on high finance transactions — like stock purchase — would bring in $100 billion a year, with the rich picking up most of the tab. That’s enough money to cut a $4,000 annual per-child check to every family with children under the age of 5.

American families are by nearly every measure struggling; they are, in the parlance of author and journalist Alissa Quart, squeezed, and the vise is only getting tighter.

This is an issue the impacts all of us. Families are losing that most American of values — self-determination — when it comes to family size. They’re losing it in red states and blue, cities and rural counties. A nation where only the richest get the privilege of having large families is viscerally unfair. Morality aside, the economic picture Lyman Stone paints of a low-child future America should be a nationwide call to action.

Surely we should all care about supporting American families so that having children doesn’t bankrupt them, and so that our kids grow up in a world that values them.

In some ways, the declining birth rate among all but the wealthiest families is a very loud canary in a very deep coal mine. American families are by nearly every measure struggling; they are, in the parlance of author and journalist Alissa Quart, squeezed, and the vise is only getting tighter. This has implications for both the current and future generations: it’s difficult for children to thrive when their family is gasping for air.

Ideally, families should be at the forefront of society. They are key to vibrant, healthy communities, and they form the most natural constituency for addressing future-facing issues like climate change. Instead, the majority of American families are shrinking and stressed, understandably pulling inward when our society most needs them leading the way.

As 2019 kicks off, it’s time for families to start talking to their elected leaders about course correcting before it’s too late. Our children — no matter how many we have — deserve nothing less.