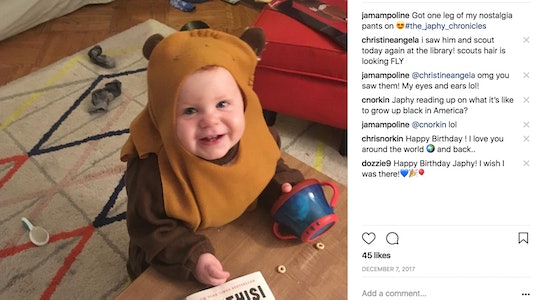 When Is It No Longer OK To Post Photos Of Your Kid Without Permission?

As I sit in the mall play area, a bit bored out of my mind as my kiddos run around engaged in a raucous game of tag with some kids they just met, I snap an adorable picture as they run by. I post it, tag the location, and go back to scanning my newsfeed as they continue to run around. I didn’t give much thought to my privacy settings, the strangers’ kids in my picture, or the location tag. As a mom on the upper cusp of the millennial generation, while I remember the first day a computer entered our home in third grade, or when we first got the internet (and AOL Instant Messenger!) in sixth grade, in many ways technology has always been a part of my life. Like most moms my age, I didn’t think much about my click-upload-share moment at the mall. Posting photos of my kids on social media felt as normal to me as breathing.

Likes and comments rolled in, and that can be an addictive feedback loop for some individuals. I know that it can be for me. A quick glance around the benches surrounding the play area showed parents all staring at their phones, ostensibly doing the same thing I was doing. Documenting life, one post at a time.

As my kids grow older, though, I have begun to question how liberally I hit the post button, and what my settings are when I do so. My kids are 4, 4, and 6. They will not have any memory of a time without social media. Their imaginative play includes using the shiny lids to my pots as their “vlogging cameras,” smiling and talking to their YouTube fans about the Play-Doh creation they have just made. Their comfortability with technology has given me the idea that they won’t have an issue with my use of social media to document their lives. But is this true?

Some moms don’t post at all because their kids cannot consent. The majority post anyway, even when their kiddos are too young to understand it, but most felt that around age 5-8 they could understand consent.

In true millennial fashion, I turned to a small online group of moms in my city to see what they felt. Most of us had thought about this issue, but just as many of us admitting to just wanting to post the cute picture anyways, without always thinking it through. Gen-X moms often felt more reserved about sharing on social media, while millennial moms seemed more comfortable.

Some moms don’t post at all because their kids cannot consent. The majority post anyway, even when their kiddos are too young to understand it, but most felt that around age 5-8 they could understand consent. Almost all of us agreed that posting vulnerable images — temper tantrums, naked bathroom pictures, medical procedures — was taboo, and crossing a line into our kids’ private moments. Moms of teens shared that they rarely post and usually ask permission. They also noted that things like family photo day or Christmas dinner are fair game, and their teens know that.

After our “chat,” I sat back down to think about what age is too old to post your kids’ pictures on social media without their consent. I thought I would come up with a hard age, but that just doesn’t seem to be the case when all factors are considered. I decided that I will now ask my 4- and 6-year-olds, and show them the picture first. They might not fully grasp how the internet works, and might still dream of being YouTube sensations like The Axel Show or Daily Bumps, but there is never an age too young to begin to grasp the concept of consent over your body and images of it.

Maybe my kids won’t even care, as they grow up in a generation that gets their first smart device typically before preschool. But maybe they will care, and be thankful that I thought it through.

As for security, I went through and trimmed down my friend list. I added more folks to my “acquaintances” list on Facebook, which my photos are hidden from. I sometimes use photos of my own kids to accompany articles that I write, so I decided that I will ask my kids permission and show them these photos, first, also. These are all little things... maybe my kids won’t even care, as they grow up in a generation that gets their first smart device typically before preschool. But maybe they will care, and be thankful that I thought it through.

My concern with sharing my kids photos isn’t really about safety. If some nefarious individual wants to get photos of my kids, or any kids, they will find a way — by screenshots, hacking, sneaking photos of them at the park. I have had anxiety about this in the past, but once my kids appeared in a national print magazine — and therefore in doctor’s offices across the country — I had to let that anxiety go.

It is about my kids' autonomy, and my role as a mom to help them grow and assert themselves. It is about forcing myself to think critically about the future while also embracing raising my kids in a digital age. So what age is the the age to stop posting pictures of your kids, without their consent? It is different for every family, but for mine, it is now.