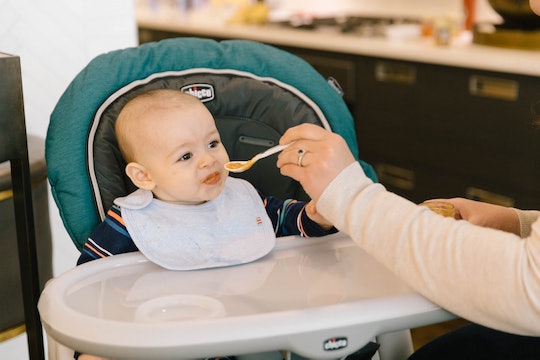 When Should A Baby Eat Solids 3 Times A Day? It Takes Some Time

Starting your baby on solid foods can be daunting. After all, everyone seems to be giving advice, but there doesn't seem to be any consensus. Your mom says one thing, Google says something else, and your pediatrician has just given you an entirely new set of guidelines. Once you've figured out when to start food and what kind of solids to feed your baby, you'll need more answers. Like, when should a baby eat solids three times a day?

According to The American Academy of Pediatrics (AAP), it's recommended that you don't start your baby on solid food until at least 6 months of age. The AAP wrote that you should start your baby on an iron-fortified cereal or oatmeal, mixed with breast milk or formula to begin. Experts have found that it's best to start with one feeding of just a few tablespoons of food per day for the first week or two; your baby is new to this eating solid foods thing, and there's a bit of a learning curve.

It's like learning to eat raw oysters for adults (or my 9-year-old). It's not the simplest of foods to get the hang of, but once you settle into it, you can slurp down a dozen blue points without looking sideways. That's what your baby is learning to do — how do they move this thick food around their tiny mouth and get it in the right direction to swallow?

According to Kaiser Permanente Hospitals, you should continue with breast milk or formula for at least one year, in addition to solids. However, the amount of food and number of meals should increase in the six month period between introducing solids and weaning.

So when should your baby eat solids three times a day? According to Kaiser Permanente, after the first week of one meal a day, your baby will be ready for two meals of iron-fortified cereals. Although the AAP noted that some babies will not like the cereal, and if that's the case, it's fine to move onto other puréed foods. By about 7 months, according to Kaiser, your baby will be ready to have a few tablespoons of food at breakfast, lunch, and dinner.

According to Neumors Health System, by 8 months of age, your baby is ready for three meals and two snacks per day. According to Kaiser, this should be primarily fruits and vegetables with whole grains and protein. (I found it interesting that they suggest starting with lamb before beef or poultry, and now I can't stop picturing a baby chowing down on a gyro.)

It's actually pretty serious though. Researchers with the American Journal of Clinical Nutrition found that the foods babies eat early in life become foundational tastes, developing their palates, and influencing their eating behaviors for a lifetime, so it's important to try to develop those tiny, often picky palates by offering them new and interesting textures and tastes, all while keeping it healthy and nourishing.

Who knows? You may have an adventurous eater on your hands who's the first in your family to actually try the oysters. Just remember, your little one will continue to get the bulk of their nutrition from their breast milk or formula until they are at least 1-year-old. Not to worry though, by the time your baby tries oysters, they'll have that eating part down and will definitely be eating at least three times per day.

More Like This
Is It Good For Babies To Be Exposed To Germs? It’s Complicated
When It’s Safe To Bring Your Newborn To A Restaurant, According To A Pediatrician
Can You Burp A Baby Too Hard? A Pediatrician Shares Tips For Gassy Tummies
The Best Toys For 3-Month-Olds