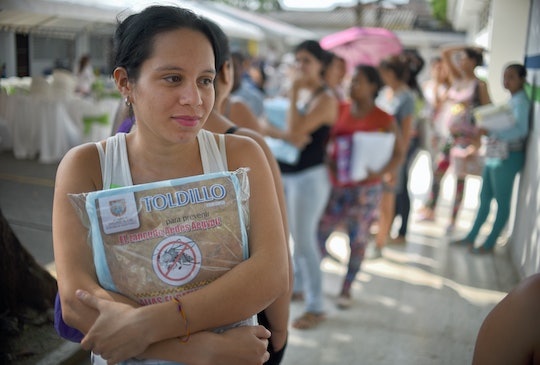 When Should Pregnant Women Go To A Doctor For Zika? It's Never Too Soon

Although mosquitoes carrying the Zika virus have not yet entered the United States, they are expected to do so within the next few weeks as weather gets warmer. The virus, while relatively innocuous for most people, has incredibly dangerous effects for babies born to women who contract the disease while pregnant. Repercussions for fetuses and newborns include severe birth defects, most notably microcephaly, which manifests in small heads and brain damage. Just this week, a woman from Honduras gave birth to a baby girl plagued with microcephaly in New Jersey, and The Washington Post reported that the woman had visited her gynecologist as soon as she developed a rash while pregnant. This raises the question of when pregnant women should go to a doctor for Zika — because if the point at which symptoms begin to show is already too late, then what's a mom-to-be to do?

More Like This
Your Guide To Hiking During Pregnancy
Pool Cannonballs Are Pretty Much A No-Go During Pregnancy
Can You Go Down A Water Slide If You're Pregnant?
Lightning Crotch Can Actually Tell You These 7 Things About Your Pregnancy

The Centers for Disease Control and Prevention is reporting that, as of June 1, there are 618 reported cases of Zika virus in the United States, and all of them are travel-related. (While most people contract Zika through a mosquito bite, sexual transmission is a less-common way to get it.)

Alarmingly, as of May 26, 341 of the Zika cases in the United States were pregnant women. Health officials are encouraging American women who have visited any of the infected countries — mostly in South America, Central America, and the Caribbean — to wait at least eight weeks before getting pregnant.

Avenues to fight the virus — such as unleashing genetically modified mosquitoes in the United States to reduce the population of the vector species and President Obama's request for Congress to approve 1.9 billion in emergency funding — have been proposed, but not yet instated, so until then, the threat is very real.

In fact, it's looking increasingly likely that pregnant women in the United States may soon be able to contract Zika virus without ever leaving the country, or having sex with someone who has.

To combat that, The New York Times reported back in March that any woman who has been to an infected area should have a blood test for the virus right away, regardless of whether or not they exhibit symptoms (and one in five adults don't). At the time, this did not mean any part of the United States, but seems like it soon will. So, all women who are pregnant or who may become pregnant should — while additionally watching out for Zika symptoms (which include fever, rash, joint pain, red eyes, muscle pain, and headaches, according to the CDC) — definitely consider striking preemptively by scheduling a visit to their physician as soon as they get off that plane from their tropical vacation.

No vaccine exists to prevent or treat the Zika virus, and there is a lot that doctors don't yet know about a mother's Zika virus infection and the connection to her baby. For example, the CDC is working to determine the likelihood that an infection in the fetus will actually lead to birth defects or other problems, and trying to figure out at what point during a pregnancy Zika affects the fetus. The Washington Post reported that the chances of a baby developing severe brain defects like microcephaly are as high as 13 percent if its mother gets Zika during her first trimester, but for the rest of the scientific community, it looks like the jury is still tentatively out.

Overall, even if you think it might be too late, it's important that pregnant women who think they may have Zika seek testing right away, as testing is much more accurate during the first week after symptoms appear. After that, false positives are more ubiquitous. As far as treatment, though, a quick response may not make much of a difference. While the CDC is carefully monitoring each of the pregnant women with Zika in the United States, there's currently no way to stop the transmission from mother to child, although the CDC suggests taking steps like getting plenty of rest, staying hydrated, and taking Tylenol to treat the symptoms.

If doctors determine that a woman has or did have Zika while pregnant, they'll likely watch that pregnancy more closely and do extra ultrasounds and tests, according to the CDC. This will measure the growth and development of the baby and could detect evidence of microcephaly or calcifications that signal that the skull is hardening too early.

Right now, increased medical treatment may not change the outcomes for babies who have been infected, but it will help the mothers and other family members know what to expect. Also, giving health officials the opportunity to study Zika cases in pregnant women firsthand could help them gain the information they need to develop medical defenses against it.