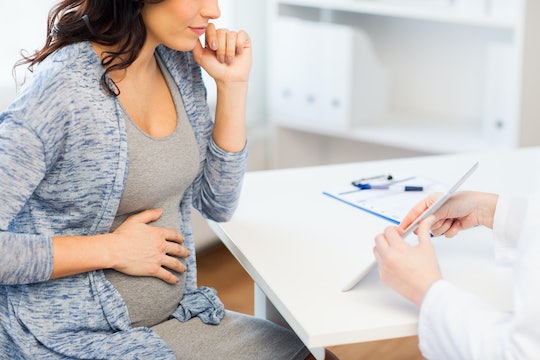 Here's When You Should See An OB-GYN If You're Pregnant

I'm notorious for saying things like, "I need to go to the doctor," and then waiting another three weeks before I actually make an appointment. When I was pregnant, however, I called my OB-GYN immediately to schedule an appointment. But was that necessary, or could I have waited? When should you see an OB-GYN if you're pregnant?

Turns out, you shouldn't wait too long. Heather Bartos, MD and Fellow of The American Congress of Obstetricians and Gynecologists (FACOG), tells Romper that ideally, most OB-GYNs like to start your care when you're around eight to 10 weeks pregnant. "However, if you've been deemed high-risk in a prior pregnancy, or have had multiple miscarriages, you need to see an OB-GYN sooner," she says. Bartos recommends calling your OB-GYN's office as soon as you know so you can talk to a nurse to find out the best time for your particular pregnancy. It's rare, but Bartos says she has had patients come in who didn't realize they were pregnant or had an issue, like insurance, that prevented them from coming in until they were later in the pregnancy, some as far as 20 to 24 weeks along. "Many OB-GYNs don't want to take a patient who is late in her pregnancy because she has likely missed many important milestones such as ultrasounds and glucose tests. They don't want the liability of a problem occurring in pregnancy," she says.

In short, once you've found out you're pregnant, it's best to go ahead and contact your OB-GYN or find a healthcare provider. Dr. Peter Chandler, Medical Director of the obstetrics and gynecology department at Natividad Medical Center, tells Romper that every woman is different, so some may need to be seen immediately while others can wait a few weeks if they've had a pre-pregnancy evaluation and their doctor feels it's appropriate. Waiting too long to contact your doctor about your pregnancy may also backfire, according to Chandler. "In general, it's never too late to see an OB-GYN when you are pregnant, but this is physician-specific — some have set their own rules on how late in pregnancy they will take patients," he says.

Your best bet is to call and talk to your OB-GYN about your medical history so they can make a decision on when you need to head in for a visit. You'll be able to discuss any potential issues with them and schedule an appointment that makes everyone safe and happy.