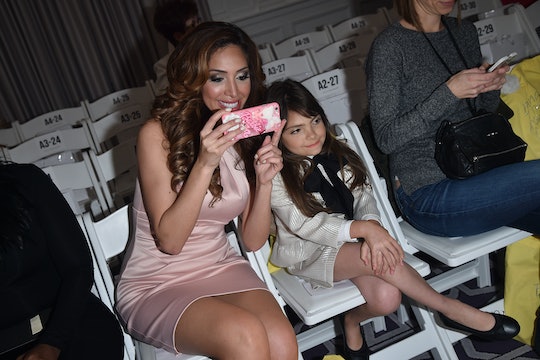 Is It Weird That Farrah Abraham's 9-Year-Old Daughter Sees Her Naked? Experts Weigh In

Most parents don't think twice about changing their clothes with their babies in the room or taking baths with their toddlers, and why should they? Very little ones don't care (or necessarily even notice) if you're naked or clothed, unless they're fussing because a shirt or bra is getting in the way at nursing time. But as kids get older, it can be hard to know what's appropriate in terms of nudity. So when should you stop being naked in front of your kids?

It's a topic that's been something of a hot button issue lately, after Teen Mom OG star Farrah Abraham made headlines (and raised eyebrows) when she revealed to TMZ that she and her 9-year-old daughter, Sophia, run around their house naked (and even have nude pictures of each other on their phones). The latter part of that admission is another conversation entirely (one involving the possibility of leaked images and a million other concerns), but the "running around the house naked" together part isn't entirely unheard of — even if it isn't exactly commonplace, especially for parents of kids as old as Sophia. When it comes to whether or not there's an official cut-off age for this kind of thing, however, not all experts agree.

It's not the nudity in and of itself that's the main issue, Dr. Moses explains, but the "social implications and attitudes" about nudity.

"The most important issue here is having good boundaries, meaning not putting children in uncomfortable or inappropriate situations," she says.

"There's a big difference, for instance, between a kid seeing a parent get dressed for work and a kid being around a parent who might be showing off his or her nudity or using it in a sexualized manner."

It's important that kids are comfortable with their bodies, of course, and that they don't associate nudity with shame — but as Dr. Moses points out, "we also need to teach them how to maintain appropriate boundaries so that they can protect themselves once they leave home." Think of it this way: It's one thing if mom or dad walks around the house in their birthday suit; it's quite another if any other adult disrobes in your child's presence. Getting back to the age issue, Dr. Moses says that your child's developmental stage is indeed crucial when it comes to how you'll conduct yourself in this regard.

"Younger children are more likely to be curious about naked bodies because they are still learning about their own, but once children hit puberty it's more likely that they will view a parent being naked as more of a violation of privacy," she says.

"Listening to your child is key. If they express discomfort because you are naked in a room with them, go someplace private or put on some clothes! This teaches them that they have a say in protecting their own boundaries and reinforces their ability to assert themselves."

Other experts, however, believe there's a definite cut-off age when it's no longer cool to strip down in front of your kids (and it's younger than you might expect).

"Each child is different, but it’s safe to say by age 5 years old you should stop being naked in front of your kids," Dr. Fran Walfish, Beverly Hills family and relationship psychotherapist and author of The Self-Aware Parent, tells Romper.

"This includes bathing and showering together, dressing in front of your child, and walking around the house nude," she adds.

Why so young? Dr. Walfish explains that even many 3 and 4-year-olds have "high levels of provocativeness and excitation in their personalities."

"These live-wire toddlers could be titillated and even eroticized by bathing naked with Mommy and intentionally or accidentally touching her nipples, for example," she says.

"I advise parents of these young children to stop being naked in front of their youngsters when after the parent sets a boundary once, the child repeatedly reaches out to cop another feel. A boundary or limit is when Mommy or Daddy says, 'You touched Mommy’s breast once. You know what it feels like and now you need to stop because no one touches your private parts except you.'"

There is a line, she continues, between natural curiosity and excitation, and these incidents give parents the opportunity to evaluate whether it's time to stop co-bathing and being naked around your kids in general.

As with so many other aspects of parenting, it seems, this particular issue all comes down to knowing your kid. If the entire family could parade around clothing-free all day without your child batting an eye, then maybe it's not something you need to worry about. If, on the other hand, your little one is a little bit more interested in your naked form than you'd like, then it might be time to start covering up. Either way, be assured that your child's level of intrigue is most likely completely normal.

"Children’s curiosity of both mom’s and dad’s bodies is typical and comes through my private practice often," says Dr. Walfish.

Soon enough, your child will have zero interest in seeing mom or dad naked (or even considering the thought!).