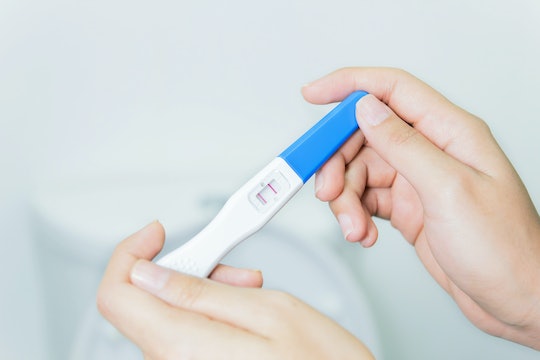 Here's How Soon You Should Take A Pregnancy Test After Sex

Whether you're hoping to be pregnant, or hoping you're not, you might be eager to take a test the minute you've finished having sex. But when should you take a pregnancy test after sex for the most accurate results? (Because when you need to know, you really need to know.) According to experts on Planned Parenthood's site, pregnancy isn't instantaneous, and a pregnancy test can't tell you anything until your body starts producing detectable levels of the hormone hCG that these tests are designed to identify.

For clarity, Romper reached out to Dr. Marcy Maguire of Reproductive Medicine Associates of New Jersy (RMANJ), who writes in an email interview that you should hold off on taking that pregnancy test until after the first day of your missed period. The reason? "Tests performed prior to the first day of missed menses are less accurate and may provide false negative results," she says.

No one needs bad information, and those tests aren't cheap. So, what causes a false negative, and how can you avoid one? Maguire writes:

If the test says no but you have doubts, you can try repeating the home test in one week. If you just can't wait — which is totally understandable, at this point — you can also have your blood drawn. "Blood (serum) pregnancy levels are much more accurate," notes Maguire.

Waiting until the day after your missed period is tough, I know. To put things in perspective, consider that women in the 1930s had to have their urine injected into a live rabbit just to find out if they were expecting. (See VeryWell's excellent history of the pregnancy test to learn how this turned out for the rabbit. If you're vegetarian like myself, you'll be grateful for the advances of modern science.)

OK, so you've waited dutifully until after your missed period before heading to CVS, where a row of home test kits stare you down, whistling the theme from The Good, The Bad and The Ugly. Don't let them intimidate you into leaving with nothing but nail polish — you know you'll just have to come back tomorrow.

Because no one wants to spend an hour reading the backs of boxes in the feminine hygiene aisle, Romper asked Maguire if any pregnancy test is more accurate than others. She cites a home pregnancy test comparison study from 2011 showing that "First Response Manual was more accurate than Clear Blue Easy and EPT." For reference, First Response is the super pink one, but don't buy the claims that tests can detect pregnancy up to six days before your missed period. There's no harm in trying, but again, accuracy is a concern if you test this early.

Is it possible to get a false positive on your home pregnancy test? Maguire notes that fertility medications can result in false positives, and women taking these medications should follow the instructions of their doctors about when to take the test.

Additionally, "women who have a positive pregnancy test should schedule a follow-up appointment with their OB-GYN for as soon as possible so that their physician can monitor their blood for an appropriate rise in pregnancy hormones, and also complete the normal initial tests performed in pregnancy," she says.

The bottom line? Don't think about pregnancy testing simply in terms of how long it's been since you had sex. Instead, consider your menstrual cycle, and track those periods. Assuming you wait until after your period fails to make its regularly scheduled appearance, you can feel quite confident in the accuracy and reliability of your home pregnancy test.