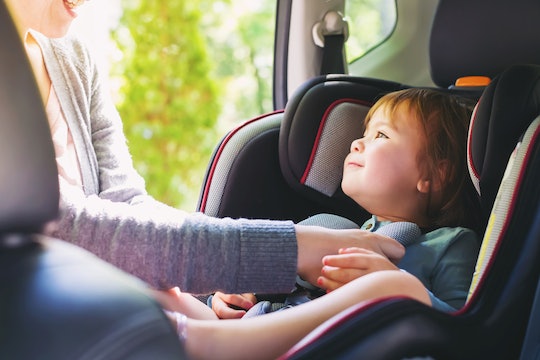 Road trips are the best thing ever. Packing good snacks, loading up all of your retro tunes onto your playlist, watching the world go by outside your window. Oh, obviously I mean road trips without toddlers. Those are a lot different, especially if your toddler is still in a rear-facing car seat and you can't distract them with funny faces and such. If you're wondering when you can start using a forward-facing car seat, here's what you need to know about the swap and when you're in the clear to do so.

According to the American Association of Pediatrics, it is highly recommended that toddlers remain in rear-facing car seats until they are at least 2 years of age. The AAP's latest car seat guideline recommendation, which was featured in the periodical Pediatrics, is longer than the previously-stated age of approximately 1 year old, or once a child reaches at least 20 pounds.

Why did the AAP made such a change? Pediatric emergency surgeon at the Children's Hospital in Philadelphia and lead author of the new policy change Dennis Durbin told CNN:

A rear-facing child safety seat does a better job of supporting the head, neck and spine of infants and toddlers in a crash, because it distributes the force of the collision over the entire body.

Only once a child has physically outgrown a car seat should they be moved to forward-facing, and they should be at least 2 years old. Why? Despite the fact that rear-facing car seats might be slightly more inconvenient for the whole family (squished legs for toddler, less interaction for parents), safety is a serious concern. According to Safe Ride 4 Kids:

While the child is rear facing their whole back, neck and head are being supported by the seat in the event of a crash. When turned forward facing, the child is being restrained by the harness strap and they lose the neck and head support. This increasing their risk of spinal and neck injury from the still heavy head being thrown forward in a crash.

If you're worried about your child's legs being squished, Dr. Ben Hoffman of the University of New Mexico in Albuquerque (as well as a child passenger safety technician) told Parenting.com:

Kids who have only been rear-faced will most likely not be bothered, since they don’t know anything else. And it’s completely fine for their feet to touch the seat back, or for their legs to bend.

Dr. Hoffman also noted, according to the site, that moving kids to forward-facing car seats before they're ready might be a tough mistake to undo:

Once you make the switch, it’s hard to go back, so try not to ever switch them before they are ready.

Naturally, a child's safety is their parents' main concern. Which means that, despite the extra work and maneuvering that might be needed to keep a restless toddler in a rear-facing car seat, the safety benefits outweigh the negatives. If you're looking for tips on how to keep your little one happy (even though they can't see you) CafeMom suggests trying the following:

Then there's the old, time-tested standby: bank on the car ride lulling them to sleep.

More Like This
26 Toddler Lunch Ideas They’ll Actually Be Excited To Eat
17 Best Potty Training Products For Toddlers
Amid A Nationwide Shortage, Moms Are Using Social Media To Find Each Other Formula
These Darling Baby Boy Names All Start With The Letter "D"