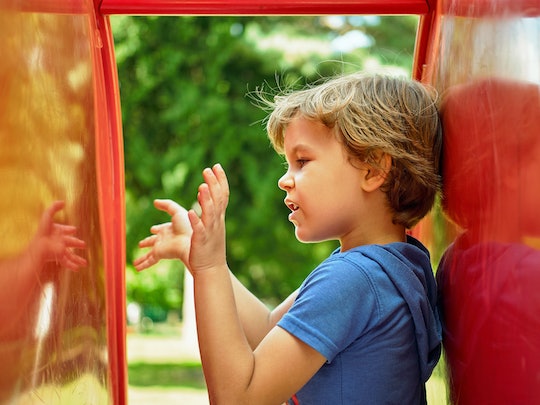 When I was about 5 years old, I would often pretend that my best friend had come over to my house to play with me. In reality, my friend was not there, but I would have full conversations imagining that she was with me playing Barbies or having tea parties with my stuffed animals. Pretending in this way (whether the "imaginary" friend exists in reality or not) is typically not an issue, but there may be certain signs pointing to when to worry about your child's imaginary friend, according to an expert.

Maureen Healy, author of The Emotionally Healthy Child and child development expert at Growinghappykids.com, tells Romper that "young children naturally have a very rich and active imagination, which may consist of imaginary friends." She explains that this vivid imagination is a normal part of child development.

Having a creative imagination as a child can be a beautiful and beneficial part of childhood. One study in the Journal of Experimental Child Psychology studied the relationship between children and their imaginary friends and found that kids who had imaginary friends are prone to developing better internalized thinking skills, which can lead to increased problem solving and planning skills later on in life. But understanding whether or not your child has the ability to distinguish reality from fantasy may play a vital role in knowing whether or not you should be concerned about the relationship they have with their imaginary friend.

"Young children before the age of 8 years old oftentimes have difficulty deciphering between the magical side of life and reality. For example, one child may believe she can jump off buildings like Wonder Woman, but instead of landing comfortably, she sprains her wrist. She just didn't realize that Wonder Woman was an imaginary character," Healy says.

There may come a time when you begin to question your child's relationship with their imaginary friend. Healy says that when an imaginary friend seems to be a "bad influence" on a child or if school-aged children are unable to focus on school work, this could be cause for concern.

"The point at which parents might show concern is if their son or daughter refuses to make other friendships in the 'real world' or if they say this imaginary friend told them to do something negative or destructive (for example, stealing, lying, hurting someone)," Healy says. "Of course, every child is different, but every child also needs to learn how to make a real friend in this world so they can continue to develop into a healthy, whole, and balanced person."

Healy also notes that even young children (under age 5) who seem to have many imaginary friends may not be cause for concern, so long as that child has the ability to make friends in real life as well. Parents can often help encourage their children to make friends by helping them try to find common ground with other kids in social situations and modeling the behaviors they wish to see from their child in their own friendships.

If you have concerns about how your child's imaginary friend is influencing them or are wondering about the amount of time they are spending with their imaginary friend, checking in with a family therapist or your child's pediatrician is one step parents can take. "I'm a big believer if a parent feels concerned about an issue, he or she should seek professional assistance and get guidance," Healy says. "The good news is that we live in a world where parents are regularly seeking guidance and most want to learn how to be the best parents they can be."