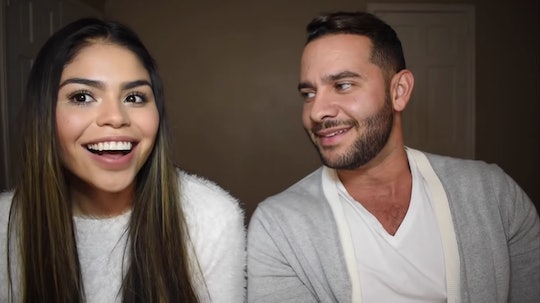 As Fernanda got to know Jonathan's mother on the last few episodes of 90 Day Fiancé, tension grew between the couple. So while the reality show just showed the bride-to-be shopping for her wedding dress, there's always a chance that a 90 Day couple will have a very different fate than planned. So assuming they did make it down the aisle: When was Jonathan and Fernanda's wedding?

Based on Instagram posts — spoiler alert — Jonathan and Fernanda seem to have gotten married. Since couples only have 90 days to decide if they will tie the knot or split up after the non-American member of the couple arrives in the United States, if they're still showing signs of being together on Instagram this deep into the season of 90 Day Fiancé, then it's usually safe to say they are married. And based on a few pieces evidence, it would seem they tied the knot in May.

On Feb. 16 of this year, Jonathan posted a sweet photo of himself and Fernanda to Instagram. "Happy Valentine's Day to this beautiful soul! The one who gets me out of bed in the morning, the one keeps me grounded and always supports my dreams," Jonathan wrote. "She does the little things and I am constantly reminded how lucky I am. To my best friend and future wife, I love you you baby!! U.S. bound in a couple days!!"

Based on Jonathan's February Insta post, Fernanda landed in the country (and began her K-1 visa) in mid-February, meaning they had to get married by mid-May to make the 90-day cutoff. Additionally, there are a few rumors that Jonathan and Fernanda reportedly got married on May 5, 2018, according to Reality Blurb and Starcasm. It's unclear whether that's really true, but a May wedding date would make sense, considering when Fernanda arrived in the United States.

That all means the couple has been married for seven months — and based on a few of Fernanda's recent Instagram posts, they seem to still be going strong. Fernanda posted a photo of herself and Jonathan as recently as this week, celebrating herself hitting 100,000 followers on Instagram. "We're just two normal people following our hearts and dreams, and I know that if you're following me it's because you can identify with me in some way," she wrote to her followers, speaking of her and Jonathan. And earlier this week, Fernanda shared a romantic photo of herself and Jonathan cozying up by a fireplace. "Thank you for showing me that our love is strong enough to go through everything. I love you so much," she wrote alongside the shot.

And by the "everything" Fernanda mentioned going through, she may be referring to bringing Ceci back into Jonathan's life, which was heavily documented on 90 Day Fiancé. Jonathan and his mom had an estranged relationship, but Fernanda wanted to get to know her before the wedding. Upon arriving, Ceci's mother tried to talk Jonathan out of marrying Fernanda, due to their age difference. (Jonathan was 32 and Fernanda was 19 at the time of filming.) However, in the most recent episode, Ceci accompanied Fernanda when she went wedding dress shopping, and by the end of the shopping trip, the two wound up bonding. Here's hoping the wedding footage makes it to 90 Day Fiancé!