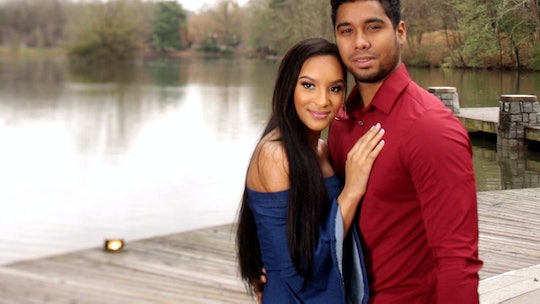 A Lot Has Happened Since 'The Family Chantel' Started Filming

Fans have been invested in Chantel Everett and Pedro Jimeno's drama since they first appeared in TLC's 90 Day Fiancé and again in the spinoff series Happy Ever After? Now, the couple is headlining their own show called The Family Chantel, and viewers know there's more turmoil on the horizon. With about a dozen 90 Day spinoffs circulating the network year-round, knowing when The Family Chantel was filmed could help fans piece together all the details. However, it's not clear when TLC shot scenes for the new reality series, and viewers will have to wait and see how the story unfolds onscreen.

Although there is no information about the Family Chantel filming timeline, the new spinoff picks up where Happily Ever After? left off. When the network announced The Family Chantel in Apr. 2019, People reported that the series would follow Chantel and Pedro's "continuing ups and downs since they lied to Chantel’s family about their engagement."

Then in an official statement, TLC revealed that Pedro and Chantel would be joined by their family members in the new reality series. "Viewers will follow this unique modern family as they try to move past their differences and come together as an extended family," the statement read. "But as Chantel’s parents Karen and Thomas try to protect their brood, will they push their children too far?"

As The Family Chantel made its debut in Jul. 2019, both Chantel and Pedro have made the media rounds to promote their new series. That said, it's clear that some time has passed since the couple filmed the show. When E! News asked about Chantel and Pedro's marriage today, things got a little awkward.

After an uncomfortable silence, Pedro simply smiled, and Chantel said, "We have our differences that we're still working on. We have our challenges, but that's something that will play out on the show."

Chantel then shared why she thought the show was so relatable. The reality star admitted that she was a fan of 90 Day Fiancé and wanted to show her relationship to the world. "I really wanted to be a part of the show because I wanted to show everybody how perfect I thought my relationship was," Chantel explained.

However, it wasn't exactly the fairy tale she had hoped. "Being on the show has made me realize that there is no such thing as a perfect relationship and we have our flaws," she said.

A lot has happened since Chantel and Pedro were introduced to fans in Season 4 of 90 Day Fiancé. The couple has faced disapproval from both sides of their respective families as well as growing tensions forming between them. Nonetheless, fans will have to patiently watch as Chantel and Pedro continue to work out their issues on The Family Chantel. And it looks like it's going to be a doozy. In an interview with Hollywood Life, Chantel opened up about what fans can expect in upcoming episodes.

“We’re still working on it,” Chantel said. "We are still working on trying to keep things between Pedro and I and not letting the outside world affect us especially when it comes to our families and people who love us and have strong opinions about what we should be doing.”