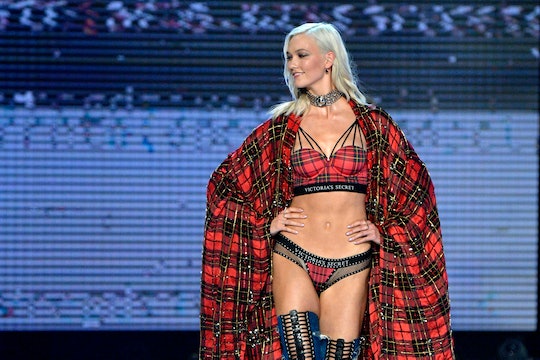 The Victoria’s Secret fashion show airs on TV on Sunday, Dec. 2 at 10 p.m. ET on ABC. But as it turns out, the show was filmed nearly a month in advance, on Thursday, Nov. 8, in New York City. As always, this year's event features live musical guests, including Shawn Mendes, Kelsea Ballerini, Rita Ora, Bebe Rexha, the Chainsmokers, Halsey, and the Struts, according to Vox.

However, as Harper's Bazaar reported, Lily Aldridge is not expected to be in the show, because she is nearly eight months pregnant. That said, she did walk in Brandon Maxwell's show at New York Fashion Week in September, when she was five months pregnant, so maybe she'll make history on the Vicky's runway this year.

In addition to all the Victoria's Secret Angels, plenty of other familiar faces will be strutting down the runway. According to Express, other models expected to be in this year's show include veteran Victoria's Secret fashion show models Kendall Jenner, Gigi Hadid, and Bella Hadid. Karlie Kloss, who walked the runway from 2011 through 2014 and in 2017, is not expected at this year's show, as per Vogue Australia. Additionally, Express expects models Winnie Harlow, Alannah Walton, Kelsey Merritt, Sadie Newman, Maia Cotton, Lorena Rae, and Iesha Hodges to all make their Victoria's Secret fashion show debut this year.

Though watching the annual fashion show is a tradition for many, the brand has received a lot of flack recently for a lack of diversity in the show. In an interview with Vogue earlier this month, chief marketing officer of L Brands (Victoria's Secret's parent company) Ed Razek defended the brand's choice not to include plus-size or trans women in the fashion show. His defense? "Because the show is a fantasy," he explained to Vogue. "It’s a 42-minute entertainment special. That’s what it is. It is the only one of its kind in the world," he added. He later apologized and retracted his controversial comments.

You can watch the Victoria’s Secret fashion show on ABC this Sunday, Dec. 2 at 10 p.m. ET. If you don't have a TV, you can stream the show live on ABC's website or via the ABC app.