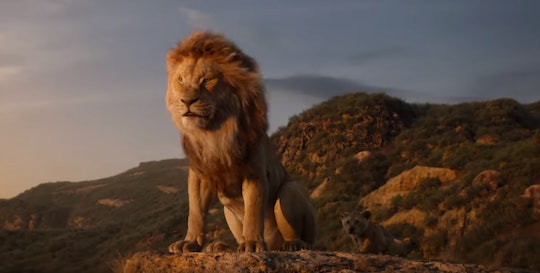 As a ‘90s kid, Disney’s animated The Lion King was one of the first movies I remember bawling my eyes out at. Mufasa’s death broke my heart, and it wasn’t until I became an adult and lost my own father that I was really able to understand and appreciate the film’s message. Now, as a mom watching The Lion King reboot with my kids, I hope to explain the “circle of life” in a thoughtful and constructive way.

The story of The Lion King is beautiful, but there are a few concepts in the film that may be hard for young children to understand. Mufasa, Simba’s father, best friend and guiding light, is killed by his jealous brother, Scar, for power. Not only does this scene depict the death of a beloved and trusted parent, it also features sentiments of injustice and betrayal at the hands of a family member.

Ouch, right? As a child, I remember grappling with why Scar would do such a thing to his brother, and then I couldn’t help thinking about how I would feel if something bad like that happened to someone I loved. Many of my nightly prayers became about my parents, and how I wished that they could be in my life forever.

Over time, my worry dissipated, and now as an adult, I know the harsh reality of death, injustice, and betrayal. Through various relationships and experiences, I’ve learned that some people are good at heart, and others aren’t. And after losing my dad in 2014, I realized that there’s nothing you can do when someone’s time has come. But it wasn’t until after my father passed that I finally understood The Lion King’s real message.

“It's the circle of life, and it moves us all,” the film’s famed song goes. “Through despair and hope, through faith and love.” I know now, that losing people you love is a part of life, but how you honor their memory is what really counts. Rather than spending time mourning my dad, I focus on celebrating his life, and I carry his legacy forward by teaching my kids the same life lessons he taught me.

This week, I’m taking my kids to go see The Lion King reboot, and after the movie, I hope to talk to my kids about how it made them feel. Through Simba’s story, I can talk to them about life, how messy and complicated it can get sometimes, and how certain experiences, like the death of a loved one, can hurt. But I can also remind them that just like Simba, they’ll always have their friends and family to lean on in tough times. And like Rafiki says in the film, “Oh, yes, the past can hurt, but the way I see it, you can either run from it or learn from it.”

As simple as The Lion King may have seemed to me as a child, I now realize the beauty of its message. Inevitably, you will lose things and people you love in life, but what matters is how you grow from it and how you carry those good values forward.