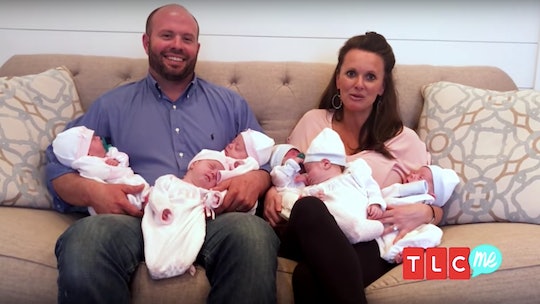 Here's When The 'Sweet Home Sextuplets' Multiples Were Born

TLC's latest docuseries following a growing family as they adjust to life with a new set of multiples is here, giving us a glimpse into the lives of the Waldrops. So viewers catching up on the show may be wondering: when were the sextuplets from Sweet Home Sextuplets born? The now happy and healthy ten-month-olds were delivered via C-section on December 11, 2017. Sweet Home Sextuplets premiered on September 18, 2018. In the first episode, we met Courtney and Eric Waldrop, who already have three boys at home. After the birth of their oldest son Saylor, they learned that Courtney had a blood clotting disorder which would make future pregnancy difficult. After several devastating miscarriages, they turned to fertility treatments for help and managed to deliver twin boys, Wales and Bridge, six years ago. Courney and Eric decided to try for just one more, and, well, you know how that story goes.

The Waldrops conceived six, and Courtney carried them all to 30 weeks, successfully giving birth with the help of a 40-person labor and delivery team at the Huntsville Hospital for Women and Children in Alabama. The Waldrops are the first set of sextuplets to be born in Alabama since 2011 and they've enjoyed a warm reception by their community, who quickly rallied to help lend the family support.

Last fall, the Waldrops' church held a 5K fundraiser run-slash-gender reveal party to help offset the costs of unexpectedly adding six babies to their brood in one very high-risk pregnancy. In the end, Courtney and Eric decided to make it an annual tradition, hosting The Waldrop Babies Give Back 5k Run earlier this summer. They donated the inaugural run's proceeds to a local pregnancy center and the primary school where Courtney was a first grade teacher.

Their names are different, and on social media that's been like the big talk, is the names. I like different names...names you don't hear a lot. Ever since we dated from when we were young, and with talk about getting married and having kids, I would always jot names down. You can look at my bible right now and the front page is filled with names. I didn't ever know I would use them all, but I got to!

Obviously, a lot of the early Sweet Home Sextuplets footage shows some very exhausted parents dealing with nighttime feedings times six. But Eric and Courtney told Today that the TLC crew was super respectful of their boundaries and somehow always anticipated when the family might need a break from the cameras.

"It was almost like they knew if it became crazy we’d stop and they’d let us get everything calm," Courtney said. "We honestly never had to say turn the cameras off. They sensed it."