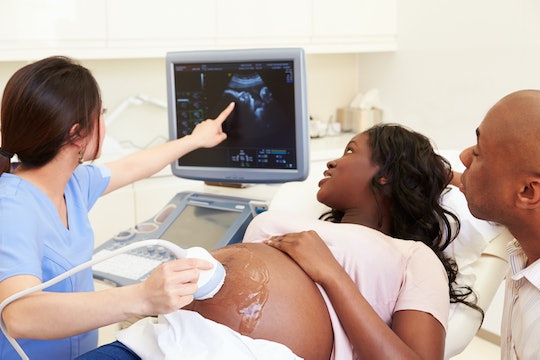 Turns Out, The First Ultrasounds Actually Weren't That Long Ago

For me, the coolest part about being pregnant (other than feeling the kicks in my belly) is being able to physically see my baby. I was hooked from the very first ultrasound where I could see a tiny flashing “light” that was my baby’s heartbeat, and I would countdown the days until I could see my baby on the screen again — even if he did look like a giant bean with limbs. Even though this technology has come quite a long way from when it was first introduced, I’m curious as to when ultrasounds were first used. And how the heck do they work anyway?

According to LiveScience, the ultrasound machine as we know it today was first used in Glasgow in 1956 — and the prototype was based on “an instrument used to detect industrial flaws in ships.” But even before that, something called the “piezoelectric effect” was discovered by Pierre Curie in 1880, where crystals in a hand-held device sent high-frequency sound waves into the body and detected echos, according to Brought to Life Science Museum. Obstetrician Ian Donald and engineer Tom Brown were the two masterminds of the prototype in the '50s, and they were able to use the machine clinically by the end of the ‘50s in hospitals. However, according to the article, it wasn’t popular in British hospitals until as late as the 1970s, and not even until the later part of the ‘70s did it become widely used in the United States.

Using an ultrasound in a clinical setting — specifically in an obstetrics setting — was routine by the end of the 20th century. And while it’s come a long way with how clear of an image we can see when someone is scanning our bellies, the nuts and bolts of how the ultrasound actually works hasn’t changed much since then. How Stuff Works reported that an ultrasound machine works by “transmitting high-frequency sound pulses into your body” via a probe. “The sound waves travel into your body and hit a boundary between tissues (e.g., between fluid and soft tissue, soft tissue and bone),” the article said, and “...the reflected waves are picked up by the probe and relayed to the machine.” Using the speed of sound, the machine is able to display the “distances and intensities of the echos on the screen, forming a two dimensional image.” So. Cool.

And the coolest thing about all these soundwaves and probes and such is that it’s completely safe and non-invasive. Perfect for when you’re trying to catch a glimpse of your still-developing human in your body. Plus, ultrasounds have come a long way, even in the last several years. Have you seen those crazy 4-D ultrasounds? Some folks find them a little creepy, and they’re totally optional, but WebMD says the difference here is it will be like you’re watching a video of your baby in utero instead of just a picture. You can actually see your baby’s entire face and when they yawn or smile. I don’t think I could emotionally handle it, but that didn’t stop me from seeing where they offered it in Atlanta and how much it would cost just now.

Long story short, we’ve come a long way, ladies and gentleman, but the basics of an ultrasound machine are still the same — it’s a safe way to check in on your baby throughout your pregnancy by using sound waves, in addition to using them for other non-pregnancy-related things. But let's face it, the most fun use of an ultrasound is to look at a baby, right?