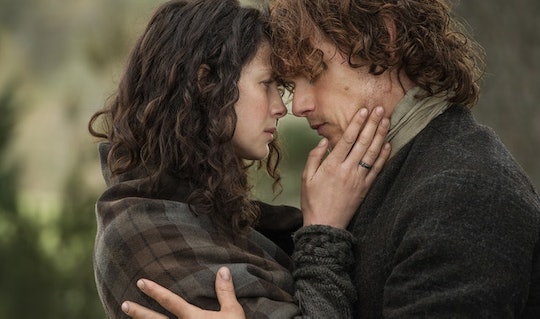 After approximately 500 months, Outlander is finally returning to Starz for its third season, which means that the gaping hole in my heart will finally be filled. Speaking of gaping holes in hearts, Jamie and Claire's heartbreaking separation in Season 2 was excruciating, but now that our beloved Sassenach knows her sexy Scot survived the Battle of Culloden, a major question on everyone's minds is when will Claire and Jamie reunite on Outlander Season 3? Because you know it's only a matter of time before these two lovebirds meet up once more.

When fans last left our centuries-crossed lovers, Claire was gearing up to rejoin her not-so-dead husband in the 18th century, now that she knows he's there to be able to go back to. It's been 20 years since they last saw each other as they said that sob-inducing goodbye in front of the standing stones. Claire was crying. Jamie was crying. I was crying. It was a difficult moment, you guys.

Now that the third installment is here, we all know that they will find one another again, but it can't happen right away. First viewers need to go through the requisite amount of pain and suffering to really appreciate the reunion and see what kind of lives they end up living without each other. I guess that makes sense, but don't expect me to be happy about it. I just want to see these two together again. As they should be.

During a recent interview with Entertainment Tonight, the show's co-executive producer and writer, Matthew B. Roberts, says that the wait is necessary, but it will be worth it to fans in the end. "I think the fans are most excited to see the reunion," he stated. "It's one of the most anticipated moments in all the books. Certainly in the TV series, we've managed to keep the couple apart and then make that reunion really special." Fine, it will be special, but how long exactly until we get this special moment?

Luckily for those of us with no patience, another producer, Ronald D. Moore, was a little more loose lipped at the Television Critics Association summer press tour. He reportedly revealed quite a bit more about when exactly Claire and Jamie's famous print shop scene reunion will be happening. "As always we take our cues from the book first. The book laid out this episodic story of Jamie, it began with five chapters of his life from the Battle of Culloden to Lallybroch, to prison and Helwater and ends up in the print shop [where Claire returns to the past]," Moore told audiences at the TCA. "So as we approached this season structurally, we laid out the cards on the board and it was clear, that's five episodes right there."

Five episodes. It will take five episodes. But while that is sure to be five very torturous weeks, I'm eager to see how this will all play out and have no doubt that the slow burn to their epic reunion will be well worth the wait.