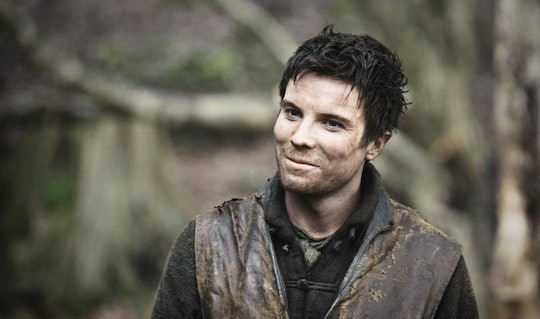 It's Time For Gendry To Stop Rowing On 'Game Of Thrones'

After having countless memes made up of him and becoming almost a running joke among fans, now is the time to ask, when will Gendry return on Game of Thrones? He’s been missing for several seasons and was last seen rowing out into the Narrow Sea, presumably to make his way back to Flea Bottom at the instruction of Davos, who helped him escape from Melisandre and Stannis. And I refuse to believe that the Game of Thrones writers would keep him alive if they didn’t ultimately have plans for him.

Season 7 of Game of Thrones is just one episode in, but it’s already begun as the season of long-awaited storylines coming to fruition, like Daenerys arriving at her birth home of Dragonstone. Or, Bran and Meera finally making it to The Wall after running from White Walkers and learning from the Three-Eyed Raven. Basically, so much has already gone down that it would only make sense to finally give fans the gift of Gendry returning on Game of Thrones. And chances are, he’s going to be making his re-entrance in the next few episodes.

Although he hasn’t been in any of the trailers for Season 7 and the actor didn’t outright confirm anything himself, Joe Dempsie did attend the Game of Thrones Season 7 premiere in L.A. and told The Los Angeles Times that fans’ reactions to Gendry returning to the series have been positive. "Very fortunately, from what I've seen it's been nothing but interest and excitement and some quite witty memes," Dempsie said.

Back in the fall, a random fan spotted Dempsie at an airport in Belfast and from there, the rumors started that Gendry would be back on Game of Thrones for Season 7 and it looks like his appearance at the L.A. premiere kind of cemented that theory. The important thing now, though, is when he’ll be back on our TV screens.

As a refresher course, Gendry was last season at Dragonstone at the end of Season 3, where Melisandre seduced him and then took some of his king’s blood (he’s Robert Baratheon’s last remaining bastard). Davos, being the totally chill and decent guy that he is, helped Gendry escape on a rowboat to find his way back home and hopefully return to life as an unassuming blacksmith.

But this is an area of Westeros where we now have several groups moving through. Daenerys and her thousands of soldiers have finally landed at Dragonstone, The Hound is hanging out with the Brotherhood Without Banners, and Arya is making her way down to King’s Landing at the moment. Even Melisandre is making her way south.

Between all of this, you have to assume that Gendry will run into someone, though my heart is set on an Arya/Gendry reunion sometime in the near future. However, since he once worked with the Brotherhood before, there’s the chance that he might find his way back to them now that they’re a seemingly prominent fixture in Season 7. Since there are only seven episodes total for Game of Thrones Season 7, Gendry will probably return in the next few episodes.

While Gendry is Robert’s only living son, he doesn’t have a legitimate claim to the throne, since he is a bastard and no king has legitimized him, and he certainly doesn’t have an army. Gendry’s return to Game of Thrones is probably going to be more about finding his place in the war ahead rather than claiming the very throne that the Mother of Dragons is after. But hey, you never know. Maybe he'll be the one come out victorious and rule them all.