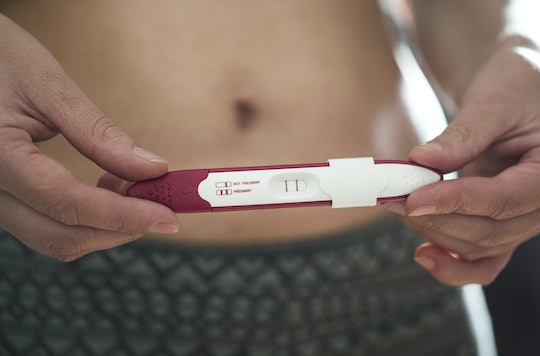 Here's When Your Baby Bump Will Show With A Tilted Uterus

Waiting on that baby bump to finally pop is no easy feat in the early weeks of pregnancy. While the nausea is reminding you that you're pregnant at every chance it gets, there's something about finally starting to show that makes it all seem real. But for moms with a tilted uterus, it can feel like you're waiting forever. Wondering, "When will I start showing in pregnancy with a tilted uterus?" It's understandable. But you shouldn't have to wait too long.

There are a lot of misconceptions out there about a tilted uterus, and one of the biggest is that it's going to cause problems during your pregnancy. A quick search for "tilted uterus" will land you at dozens of pregnancy forums where moms are concerned that they won't get to feel the baby kick, see their little one on an ultrasound, or show as early as expected because of their uterine position. But it turns out, a tilted uterus shouldn't affect your pregnancy experience.

Dr. Marc Winter, an OB-GYN at Saddleback Memorial Medical Center in Laguna Hills, California, tells Romper that, overall, most pregnancies are the same whether they are tilted or not and, eventually, you'll sport that sweet baby bump, too. "It may take a little longer to show in the beginning of pregnancy, but by four to five months, the appearance is similar to a non-tilted uterus," Winter says.

In fact, your uterus won't even be tilted once you're farther along in your pregnancy, according to G. Thomas Ruiz, an OB-GYN at Orange Coast Memorial Medical Center in Fountain Valley, California. "As a uterus grows in pregnancy, the retroverted uterus straightens out," Ruiz says. Which means you'll be able to feel your baby kick, see them in an ultrasound, and have a cute baby bump to offset the horror that is pregnancy gas.

Turns out, a tilted uterus doesn't really affect your pregnancy at all. You most likely didn't even know you had a tilted uterus until your first visit with your doctor, so try not to worry. You'll have a normal pregnancy, just like everyone else, and will be in maternity jeans before you even realize it. (And you'll probably be in them for longer than you thought because man, that elastic waistband is hard to let go of.)