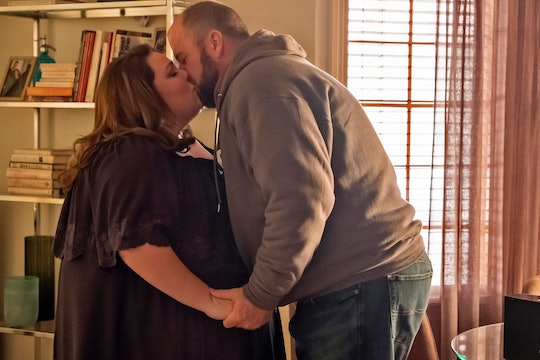 Even if you haven’t been able to catch your breath yet while watching the fast and serious relationship unfold between Toby and Kate on This Is Us, you have to agree that they’re a solid couple and that they’ve been through more than enough to be ready to head to the altar together. But with everything else that’s been going on, when will Kate and Toby get married on This Is Us?

Because of Kate’s would-be singing career and the announcement of her pregnancy, there’s a lot going on with the dynamic duo right now and somehow, I don’t see a big fancy wedding factoring into the story for Season 2. The preview for Season 2’s upcoming episode "The Most Disappointed Man," however, would have you believe differently.

In the promo, you see Kate and Toby talk about having a quickie wedding at the courthouse and you even see them start to go through the process of it all, but will they actually do it? They’ve always taken things relatively quickly as a couple and that’s worked for them for sure. But in a way, Toby and Kate deserve an all out wedding episode to mark the beginning of their life together.

Chrissy Metz (Kate) recently revealed to Entertainment Weekly that wedding plans for Kate and Toby might be put on hold for a little while and I’m inclined to believe that means courthouse weddings too. "Kids are not cheap, that’s for sure. And weddings aren’t either. So I think that Kate and Toby are really living in this moment, and are living in the now," Metz revealed, while adding:

And while, of course, that’s in the back of both of their minds and the to-do list — and who knows what a Kate-and-Toby wedding will look like, which is another story for another time — I do think that it’s something that is going to be put on the back burner because we don’t know what this all is going to look like.

But if that means Kate and Toby won’t be getting married in the next few episodes, then when will the wedding actually occur? There’s nothing wrong with getting married at any point during a pregnancy, so in theory, they could still plan a wedding and go through with it before Season 2 is up. However, Chris Sullivan (Toby) told Entertainment Weekly that fans might have to wait a while longer for the wedding. "We’ll see if they’re able to [get married]," he teased. "I don’t know if you’ve ever planned a wedding, but it’s super hard to do in 18 episodes. That’s not enough time to plan a wedding. We’ll see if they get there."

But even if they don't end up tying the knot this season, would that be the worst thing in the world? Even if Kate and Toby don’t get married by the end of Season 2, they’ve still proven themselves to be one of the strongest couples on TV and they already have a solid relationship, which is what really counts anyway.

In this week's promo, Kate and Toby are standing in line at the courthouse when she looks at another couple who seem to have just gotten married and while her expression might be one of longing, it could signify her torn feelings about a rushed ceremony. Perhaps she realizes that she'd much rather have the entire Pearson family there for her. So, in the end, my money’s on Kate and Toby holding off on their fast wedding.

Instead, I see Season 2 focusing more on the pregnancy and possibly their baby’s birth by the end of the season. And if I know Toby like I think I do (yes, I’m claiming to know a fictional character), he’ll be totally chill about the whole thing. I think I’m sensing another Jack Pearson type of dad and husband in the making and I’m totally here for it.