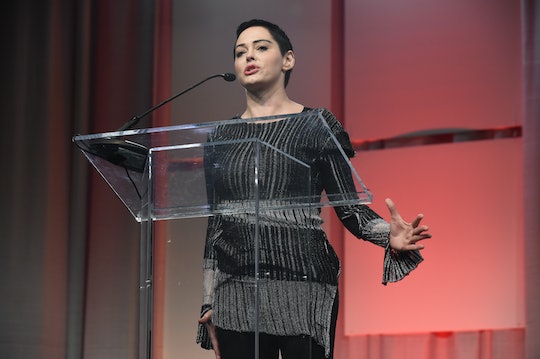 The show, according to a statement from McGowan reported by E! News, follows the actress as she prepares for the release of her memoir BRAVE. Along the way, it will explore McGowan's activism, her recent controversies (such as criticizing the all black dress code at the 2018 Golden Globes), and her allegations of sexual assault against producer Harvey Weinstein. Her statement about the show reads as follows:

You are formally invited into my mind and world. I am thrilled to partner with E! to amplify my message of bravery, art, joy, and survival. As I ready my book, BRAVE, I realized I wanted to show how we can heal through art even when being hounded by evil. I want to have a conversation with everyone, and most especially you, about looking at things differently and seeing beauty everywhere. E!'s tremendous reach and impressive platform allow me to globally communicate the importance of living a BRAVE life.

McGowan has been outspoken about her support for the #MeToo movement and her dedication to exposing the culture of sexual harassment in Hollywood. She has been similarly open about her own experiences. McGowan alleged that she was raped by Weinstein in 1997. Weinstein released a general statement about the numerous allegations against him that was shared with Romper by his lawyer, Lisa Bloom. It read:

But Weinstein also responded directly to McGowan's allegation, which she first shared on Twitter. According to Entertainment Weekly, a representative for Weinstein named Sallie Hofmeister said regarding McGowan's claims, "Any allegations of non-consensual sex are unequivocally denied by Mr. Weinstein."

However, although McGowan's alleged assault by Weinstein will come up in Citizen Rose, he won't be seen or heard. Entertainment Weekly revealed that his face will be blocked out on the show and his name will be blurred. McGowan would only refer to him as "the monster" because, according to her in the premiere, "He is the face of the monster — he was my monster, and he is so many women's monster. Seeing his face everywhere is triggering."

Viewers who are curious about hearing McGowan's side of the story in her own words can catch the premiere, but unfortunately it looks like there will be a little bit of a wait before the series airs in its entirety. It may be a few months before anyone gets to see the conclusion of Citizen Rose.