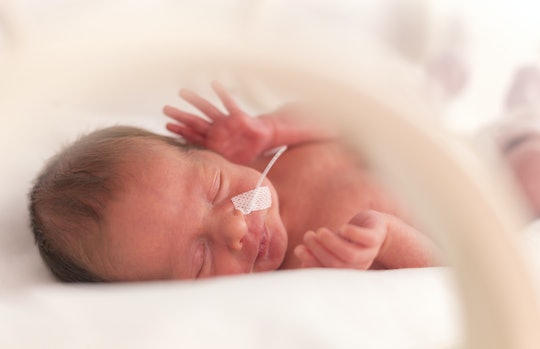 If Your Preemie Won’t Sleep Through The Night, Don’t Panic — Experts Have A Theory

Sleep deprivation is a guaranteed part of parenthood (and, coincidentally, a tried-and-true method of torture). Parents of premature newborn babies may find themselves a few nights into being at home, wondering, “When will my premature baby sleep through the night?” Moms and dads with babies born early may have run out to buy smaller clothes and diapers, but few are aware of the sleep struggles they may be up against.

Baby Center noted that babies who were born early have shorter sleep cycles, and also sleep more lightly, than full-term babies. This makes their sleep sessions shorter. It also means they’re easier to wake. But what do pediatricians have to say about this?

“I don’t have a whole lot of evidence for that, but I would believe it,” says Randy Thornton, M.D., pediatrician at Jacksonville Pediatrics and Wolfson Children’s Hospital of Jacksonville, in an interview with Romper. “It obviously depends on how premature they are — 36 weeks versus 28 weeks is a huge difference. The more premature, the bigger issues you’re doing to have with their sleep.”

While there isn’t much data available on preterm babies’ sleep cycles, Thornton says there are some known reasons why these little ones pop open their peepers so often throughout the night. One, of course, is to eat. (Relatable.)

“The biggest cause is that they’re feeding so frequently. Of full-term babies, 25% of 2 to 4-month-olds are getting six hours of sleep a night, and 90% of 6-month-olds are. Premature babies have to feed more frequently just to maintain their blood sugar and growth, so they tend to wake up more often,” he explains. “The other thing that can be an issue is respiratory problems. Since their lungs may not be fully mature, getting just a little bit of mucus in there makes it harder to sleep.”

HealthyChildren.org adds that for premature babies, six hours of uninterrupted sleep may not come until 6 to 8 months of age or later. But with that in mind, parents can still try to establish good routines around sleep to support the rest their baby is getting.

“The most helpful thing you can do is letting them get older and helping them grow by feeding them routinely,” says Thornton. “Also, be really boring with the child in the middle of the night. During the overnight feedings, don’t give them any encouragement to wake up. Keep the lights down low and don’t interact. Just feed, burp, and get them back to sleep.”

No matter what, Thornton says not to bring your baby into bed with you to try and soothe them in the middle of the night. This can increase the risk of Sudden Infant Death Syndrome (SIDS), per Baby Center and Thornton’s own experience.

“Never, ever bring them into your bed. The biggest mistake that is life-threatening is exhausted parents bringing the baby into their bed. Sometimes all you can do is deal with the crying; they’ve got to stay in their own bed. With my daughter, even as a toddler, I’d lay on the floor and put my hand through the crib and she’d hold onto it and go right back to sleep. Parents are going to figure out what works, but never bring them into your bed.”

If your newborn has been fed and changed and is still crying through the night, know that it may just take time. Thornton recommends the Ferber Method for parents whose babies have reached 6 months old and are still trying to establish a healthy sleep routine.

More Like This
Here's When Your Baby Might Start Sleeping Through The Night For Real
Baby Not Napping At Day Care? These Reasons May Be Why
Should You Be Giving Your Toddler Melatonin To Help Them Sleep?
These 4 Sleeping Positions Will Keep You Comfortable After A C-Section