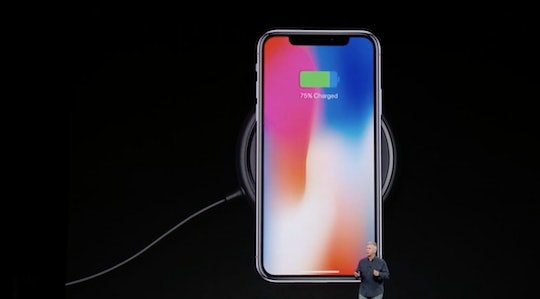 When Will The New iPhone's AirPower Charger Be Released?

At Tuesday's Apple Event, the iPhone 8, iPhone 8 Plus, and iPhone X were all revealed. Despite their many differences, the phones do have something in common: the ability to charge wirelessly. So, regarding this new charging device, when will the AirPower charger be released? Apple's new charging mat promises to juice up your iPhone, Apple Watch, and AirPods (cough cough, headphones) all at once, and users are just itching to try it on for size.

It's important to note that the new iPhones will actually be compatible with pre-existing wireless chargers, seeing as they use universal Qi wireless charging. To find something Qi-compatible, you can use this list of Qi chargers. So you won't necessarily need the AirPower in order to get that battery to 100 percent, but you've got to admit: An all-inclusive charging mat seems pretty cool and space age-y, doesn't it? Imagine taking a trip and only having to bring one charger for all of your gadgets! What a charmed and tangle-free life that would be.

Despite all the hype, though, the AirPower charger isn't out yet. Apple didn't give an exact release date at their event, but did share that it wouldn't hit until sometime in 2018. So for now, it looks like another company's wireless charger will have to do the trick. Luckily, you've already got plenty to choose from, Samsung and LG among them.

Apple fans are giddy at the thought of something so innovative, and are sharing their immediate desire for AirPower on Twitter. Though it might seem a bit extra for some, others simply can't wait to put the mat on their bedside tables and let the magic happen:

One user brought up an incredibly compelling question regarding the decision to call the charger "AirPower," however:

Naming mistakes aside: How much will the AirPower cost? The newly introduced iPhones got a lot of flak for their high price tags, running from $699 on the low end to over $1,000. Gizmodo highlights that you can get a charging mat from another company for just $16 on Amazon. That price, however, accounts for the charging of just one device. So would the AirPower sell for three times that ($48), then? Tech YouTuber Marques Brownlee postulates that it'll "probably [be] quite expensive," but hasn't put a number on it yet. For now, Apple's keeping quiet on the AirPower specs.

As mentioned, the AirPower will be compatible with iPhones 8, 8 Plus, and X — some sleek new pieces of technology. The iPhones 8s look a lot like the iPhone 7 and offer improved cameras and processing. The iPhone X, while also being the most expensive iPhone model to debut, looks a bit different from the 8. Ditching the home button, it offers an "edge-to-edge" display so that the screen no longer has any borders, according to The New York Times. As far as features go, consumers appear to be equally excited (and worried) about its facial recognition software that unlocks your phone without a fingerprint or passcode.

Apple also introduced "animoji" on Tuesday, which will only be available on the iPhone X. The feature seems pretty cool: Users select an emoji, talk into the front-facing camera, and the emoji is then animated to speak whatever message the user recorded. Twitter wasn't totally thrilled, though, and found the talking unicorns and poop emoji to be kind of creepy:

"Preorders for the iPhone X will begin on Oct. 27 with shipping planned to begin Nov. 3," as The Verge reported. iPhone 8's will begin their pre-sale on Sept. 15 and will get to users on Sept. 22. As for the AirPower charger? That's still TBD.