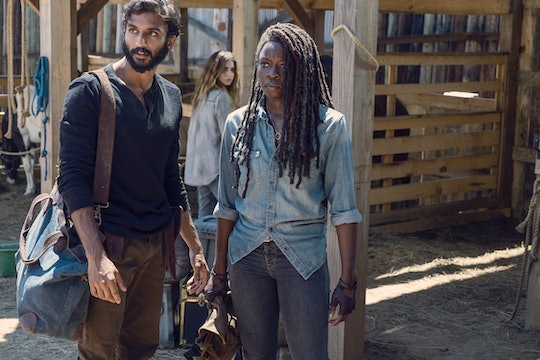 Six years after Rick’s disappearance on The Walking Dead, things are as messy as ever. Before he was whisked away by a helicopter to an uncertain fate, the three communities were thriving on their own and, in some ways, together. But now things are strained between them and before the show gave viewers many answers about that, the winter finale came and went. So when will The Walking Dead come back? Things just got real and I have a feeling another war is brewing, which means that Hilltop, Alexandria, and The Kingdom are all going to need to work together to fight the new big bad.

According to a press release from AMC, The Walking Dead returns on Feb. 10 at 9 p.m. ET. This means that fans are going to have to wait more than two months before any questions are answered and before they can see what happens with the communities at odds with each other and Negan, who escaped his cell. Yes, he’s back out in the wild and it's stressing me out just thinking about what he’ll do next. Honestly, the winter finale could have been a season finale, given how bananas it was, but that just means there’s a lot to look forward to when The Walking Dead returns.

The press release said that the second half of The Walking Dead Season 9 will continue to deal with those who were once friends and, for all intents and purposes, family, but who are now distant from each other literally and figuratively speaking. But once they realize what danger these strangers dressed in walker skin clothing present, who are known as The Whisperers in the comics, they’re going to have to work together or potentially fall on their own.

When The Walking Dead returns in 2019, viewers will be drawn back to the mysterious new group of enemies and a newly freed Negan who may or may not be a bad guy again. I’m hoping for some redemption, but I won't be holding my breath on that one. Showrunner Angela Kang did tell Entertainment Weekly that, through flashbacks, viewers will get to see some of the aftermath of Rick’s exit.

"We’ll definitely be telling the story of what happened there, and what’s kind of exciting about a six-year jump is that there is the opportunity to go back and tell some of those stories," she said. "So we’ll see some of what has happened." She also hinted at a "deep, emotional story for Michonne, and for Daryl too."

There’s obviously a reason why Daryl went nomad and why Michonne is so disconnected from everyone besides those at Alexandria. Apparently, all will be revealed when the show returns in February.

When Sunday’s episode left off, Michonne, Daryl, and some of the others were fighting off Whisperers after one stabbed and killed Jesus. Before that, Negan found a way out of prison through an unlocked jail cell. It’s uncertain if the unlocked cell was an accident or if someone left it unlocked intentionally, but Negan took the opportunity to slip right out. And Henry was in the drunk tank at Hilltop after his first ever night of teen drinking. I’m sure he’ll be able to continue his blacksmith apprenticeship, but without Jesus there to make the call or run Hilltop, things might get worse before they get better.

Still, I expect all three communities to eventually find a way to work together now that they’ve seen firsthand what The Whisperers are all about. When The Walking Dead comes back, it’s going to be an intense second half of the season.

More Like This
10 Kid-Friendly Halloween Episodes From TV Shows Your Little Vampire Already Loves
'The Proud Family: Louder & Prouder' Is Returning For Season 2 On Disney+
'Workin’ Moms' Season 7 Is Reportedly In The Works! Here’s Everything We Know
Khloé Kardashian Reveals Tristan Thompson Proposed To Her Last Year & Why She Said No