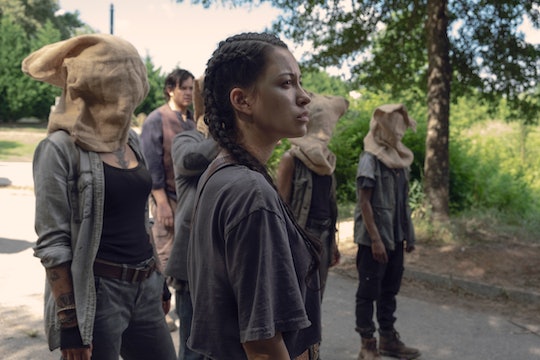 If the apocalypse wasn't hard enough with trying to outrun or kill your zombified loved ones, The Walking Dead had to bring the Whisperers in and make things even more complicated. They’ve been featured heavily in the comics and have only been alluded to in the TV series, so some fans are probably curious about who the Whisperers are on The Walking Dead.

Viewers may have heard someone in a pack of walkers in the trailer for the rest of Season 9 whisper, "Where are they?" and assumed that it means the walkers themselves are somehow evolving. But the voice may have actually been from a Whisperer. In the comics, they’re surviving humans who wear the skin of walkers to blend in and move with packs freely. They communicate by — you guessed it — whispering to each other in a way that blends in with walkers’ guttural hisses and groans.

But instead of only using the walker skin disguises to survive, they use them to kill anyone who gets in their way, human and otherwise. They move with walkers and use the technique of blending in to steal from other groups and continue on. It’s not a bad method of survival, but it could mean big trouble for Rick’s former group.

In the past, Daryl and the others have used blood and parts of walkers to blend in and stay alive, but the Whisperers take it to a whole other level. They also do it with malicious intent and don't seem to have the drive to want to work with Alexandria and the other mini communities of The Walking Dead universe. In the trailer, they’re likely looking for Daryl and Rosita, who are hiding in a ditch, covered in mud. I can't imagine they’re looking for them for any reason other than to kill them and steal what they have. And because Whisperers blend in with walkers, their intelligence is immediately underestimated by any survivors who try and trick a moving herd.

The comics portray Whisperers as people on the outskirts of society both before and after the virus outbreak. In some cases, they try to recruit other surviving humans into their growing herd, but their objective otherwise is to shun most humans. Eventually, there’s a "Whisperer War" in the comics, which includes Negan coming into action and to the aid of Rick and the others. Of course in the show, it might be more like Negan helping Michonne and the others, but this seems to be the path things are going right now.

The Walking Dead special effects makeup artist Greg Nicotero told The Express that while the show’s version of the Whisperers are slightly different than the comics’, they’ll still be horrifying to lovers of the comics and show watchers.

"We looked at the comic book and in that, they look like their faces are melting. They have added weight to them but we didn’t really want to do," he said. "But there’s no digital augmentation to the Whisperers. They’re really cool and I stand on set and take photos all the time but you can’t take a bad picture of them. We built the brow just far enough down the mask that it makes a shadow over the eyes and when they stand there they look creepy."

Just like any season of The Walking Dead, things can't stay stagnant for long and the Whisperers will likely be the next big bad of the series. Since Season 9 is already halfway over, chances are, the story arc will bleed into Season 10, but they’re definitely a different kind of foe for the core group. The Whisperers are humans, but they rarely use guns and they’re more animalistic than anything. They're probably going to be one of the more unpredictable and legitimately creepy baddies the show has seen yet.