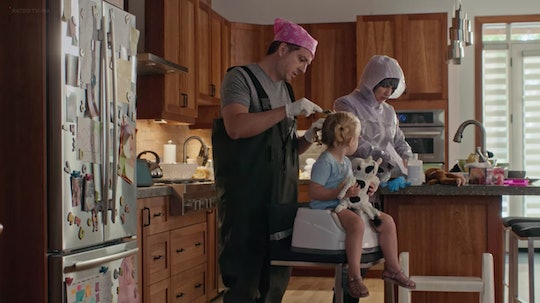 Although Workin' Moms Season 4 only just hit Netflix earlier this month, fans of the Canadian sitcom are already wondering when the fifth season of Workin' Moms will premiere. And given the show's relatable portrayal of the often times messy and chaotic nature of postpartum life it's not hard to see why.

While the show has been renewed for a new season, there's currently no firm date for when fans in Canada, the United States, or elsewhere can expect to see new episodes. That being said, the show's previous pattern of release dates suggest a late spring 2021 Netflix release might be in store for Workin' Moms Season 5.

In an April 14 interview on What're You At? With Tom Power, Workin' Moms creator and star Catherine Reitman announced that Canada's CBC Television had renewed the hit sitcom for a fifth season. It's expected that Netflix, which currently carries the first four seasons of the show, will also eventually pick up the fifth season after it airs in Canada.

For fans in the United States watching the series via Netflix, Workin' Moms' Season 5 premiere date will largely depend on when new episodes drop in Canada. According to Netflix Life, Workin' Moms has so far followed an annual release schedule. Seasons 1, 2, and 3 premiered in Canada in January of 2017, 2018, and 2019, respectively, while Season 4 aired in Canada from February to April 2020 and hit Netflix in May. If the show continues to follow that release pattern, Season 5 of Workin' Moms could hit Netflix in the late spring of 2021.

That being said, the official Netflix release date for Workin' Moms Season 4 wasn't announced until roughly a month before its worldwide Netflix premiere. So, it could be quite a while before Netflix subscribers hear anything concrete about the release of Season 5. It's also worth mentioning that the world is, you know, currently in the midst of a global health pandemic that could impact upcoming television projects like Workin' Moms. At the moment, it remains unclear if coronavirus-related closures and stay-at-home orders could delay filming and subsequently push back the release of Workin' Moms Season 5.

For now, however, Reitman and the rest of the Workin' Moms crew are simply focused on putting pen to paper. "I've been running the writers' room here out of my home," Reitman told Power back in April after announcing the show's renewal. "It's been kinda cool. All the writers get on Zoom just like we are right now and we talk out big ideas and we've actually been reviewing drafts."

So, until Season 5 premieres, it seems that fans of Workin' Moms will just have to make do with rewatching Seasons 1 through 4 over and over again on Netflix.