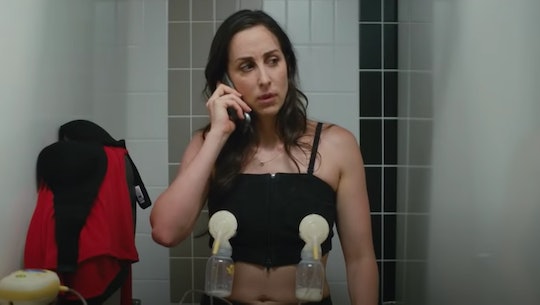 ATTN: 'Workin' Moms' Is Officially Coming Back For Another Season

After four hilarious and relatable seasons, the Canadian comedy Workin' Moms is coming back for Season 5. Yup, the CBC officially green lit another season of the popular series on April 12, but fans will have to hang tight for more as Workin' Moms Season 5 is currently in pre-production due to the ongoing pandemic.

"I've been running the writer's room here out of my home," Catherine Reitman, the show's creator who also portrays Kate Foster in Workin' Moms, said during a recent video appearance on What're You At? With Tom Power. "It's been kind of cool. All of the writers will get on Zoom and we talk out big ideas and we're doing drafts."

While the masterminds behind Workin' Moms get to work on Season 5, fans of the show can rewatch the first four seasons on Netflix. All eight episodes of Season 4 will make their Netflix debut on May 6, so mark your calendars.

Workin' Moms Season 5 will surely be as real and relatable as past seasons, tackling an array of topics like co-parenting struggles, postpartum depression, and mom guilt. Reitman, who shares two sons with her husband Philip Sternberg, who also works on Workin' Moms, has been inspired to tell real-life stories real working moms face. "There's a repression against mothers where we're expected to be full-time workers and pretend we're not mothers, and then expected to be full-time mothers who pretend we're not working. Simultaneously, within the hours of the week that exist," she told Variety in February 2019. "It felt like, OK, we can't just tell the story of women trying to be ambitions and those challenges, we have to show the darkness that we face all the time."

With realness and comedy, Season 5 of Workin' Moms will surely continue to tackle even more of these relatable challenges. In the meantime you can get your Workin' Moms fix and some much-needed laughs on Netflix.