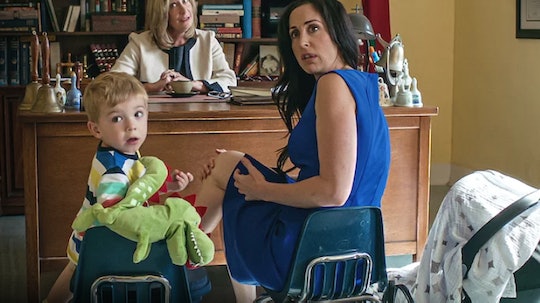 It's nearly impossible to describe the delicate, precarious balance of the life of a working mother, but Workin' Moms has done it incredibly. For three seasons, exhausted moms have enjoyed the comedy/drama series and, fortunately, Workin' Moms Season 4 is coming to Netflix soon.

Since it first debuted on Netflix in January 2019, Workin' Moms has become a huge hit in the United States, although it originally aired in Canada in 2017. The show, created by Catherine Reitman, who also plays the series lead Kate Foster, follows several working moms who met at a Mommy and Me playgroup and eventually become friends. The first three seasons see Kate and her fellow mom friends trying to navigate their busy jobs while raising kids, keeping their romantic relationships in tact, staying in shape, and oh yes, trying to hold on to those all-important female friendships along the way.

After three seasons, fans have come to appreciate the many moods of Workin' Moms, and now Season 4's release date on Netflix has finally been announced. Mark your calendars because the newest season will be coming to Netflix worldwide on May 6.

Workin' Moms has dealt with issues like mom guilt and postpartum depression, something Reitman told Glamour she struggled with herself and actually became the impetus behind creating the series. "It wasn’t until my husband, Philip, urged me to write about my experiences that I began to see the light," she wrote for Glamour. "By fleshing out my sadness, exposing the strange and funny angles to it, I began to recognize the 'me' that I was prior to having my son."

It's a good thing Reitman decided to write about her feelings, apparently, because she told the CBC in an interview that she believed there was a "real hunger" for shows depicting the reality of working mothers on television: "I think there was a real hunger out there for authentic mother stories. And I think it's one of the reasons we're also criticized ... is that we're meant to represent every mother who's working, or every mother period and what they look like."

It's natural to want to see yourself on screen, of course. And with Workin' Moms representing, well, working moms, it's obviously going to be the show to watch after the kids go to bed for the night.