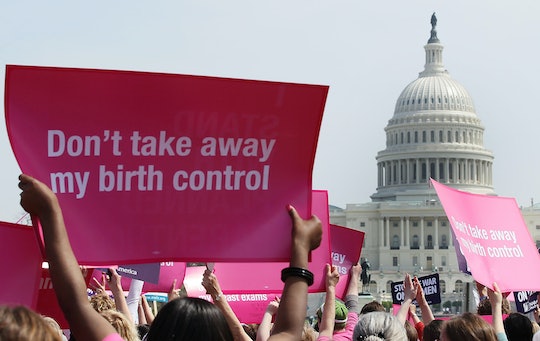 When Would The Personhood Bill Take Effect?

On Jan. 17, Georgia Rep. Jody Hice introduced a new bill to Congress that set off alarm bells in the ears of reproductive rights activists across the country. HR 586, titled the Sanctity of Human Life Act, aims to "provide that human life shall be deemed to begin with fertilization." If passed, it could make it much easier for politicians to ban access to abortion, in vitro fertilization, and emergency contraception. The bill's introduction raises several questions for Americans worried about possible repercussions. Is the bill likely to pass? If it does pass, when would the personhood bill take effect? And while it's still at this stage, what can people do to protest the bill?

First off, it's important to note that bills like HR 586 have historically had a pretty hard time in Congress. According to Rewire, Republicans in both the Senate and the House of Representatives have tried passing personhood bills for more than a decade now — and those bills have always failed. Even at the state level, personhood bills have been repeatedly defeated in Mississippi, North Dakota, and Colorado.

However, to say that the past year has been a bit of an anomaly in politics would be an understatement, so it's fair to ask what would happen if Hice's bill did get passed.

According to the U.S. House of Representatives, a bill needs to make it through several stages before becoming law. First, a representative sponsors a bill. (In the case of the personhood bill, that's already happened.) Then, it's assigned to a committee to be studied, and if it's released by the committee, a date is set for the bill to be voted on, debated, or amended. If the bill wins by simple majority, it goes onto the Senate, where the same process (where it's studied by a committee, released, and analyzed by the Senate) happens again. If it passes with a simple majority, a conference committee made up of House and Senate members puts together a final version of the bill, which has to be approved by both the House and the Senate before being passed onto the president. If it makes it that far, the president has 10 days to sign the bill into law.

Clearly, Hice's personhood bill has a long ways to go before getting signed into law — and there are several points throughout the system in which it could be nixed entirely. If you're concerned about the bill's progress however, you can track actions taken on the bill online, and reach out to your representatives with your concerns. After all, they're there to represent their constituents, and that includes you — so make your voice heard as early and as often as possible.